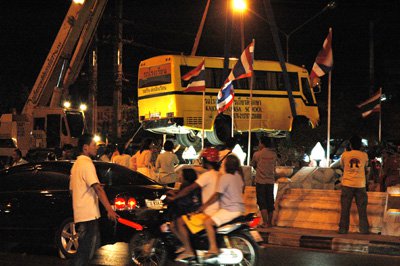 THALANG: Fourteen tired students and staff of Kajonkietsuksa School returning home from Haad Yai had a rude awakening Tuesday night, when the bus they were traveling on crashed into the Heroines Monument at about 10 pm.

The bus, nearing the end of an eight-hour journey, was carrying seven of the school’s top students, seven teachers plus the driver. The clever youths, from both primary and secondary levels, had won the Phuket round of an education contest to earn the right to enter the regional competition in Haad Yai, where they took fifth place.

As the bus was circumnavigating the Heroines Monument roundabout, a pickup coming from the direction of Pa Khlok cut them off, causing the bus to crash into the circle, a source at the school said.

School officials strenuously denied reports that the driver, a school employee, fell asleep at the wheel.

Although twelve people required hospital treatment, there were no life-threatening injuries.

The two much-revered statues at the center of the monument were undamaged.