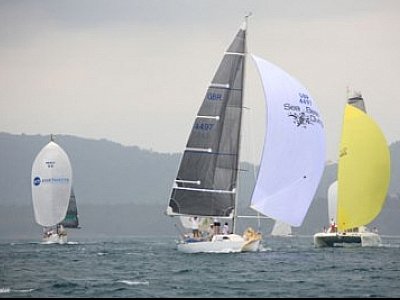 A resurgent Katsu skippered by Ben Copley on 13 points has laid down a late challenge by taking over at second place from KukuKERChu with David Ross, while Ricky Pointon’s Jing Jing clings to third on 15 points.

Mark Chapman and his Piccolo crew have extended their lead in IRC 2 class, and with seven points are now four points ahead of Royal Thai Navy 4, skippered by Cdr Pornprom Sakultem on 11 points. Peter Dyer’s Team Sea Bees dropped to third position on 13 points.

The Firefly 850 Sport class title is very much up for grabs on the last day. Peter Dyer’s Team Land and Houses have seven points, and are challenged by Ian Coulson and Clarence Tayong’s Voodoo on eight points while Twin Sharks skippered by John Newnham are in third position on 12 points.

Ao Chalong Yacht Club will host the prize-giving ceremonies from 6:30pm to 7:30pm which will be followed by a buffet dinner and party.

Final races of the Six Senses Phuket Raceweek will be held today off the Evason Phuket & Bon Island, Rawai.

The Phuket Gazette is a proud sponsor of the Best Regatta in Asia.