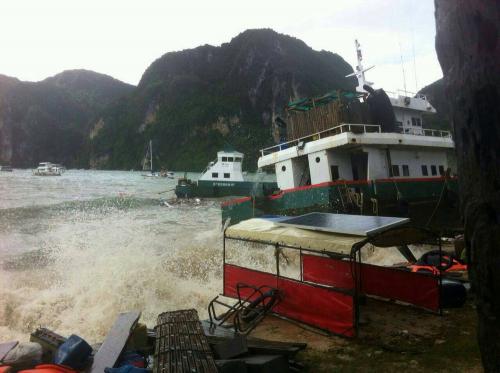 The Andaman Jet Wave ferry, registered to carry 250 passengers, had yet to begin its daily operations of carrying tourists to and from Krabi and Phi Phi, explained Krabi Marine Police Inspector Chaiyasit Kancharoen.

“It was moored overnight at Tonsai Bay and started taking on water this morning,” Lt Col Chaiyasit told the Phuket Gazette.

“Nobody was on board,” he added.

Strong waves also beached a large cargo ferry, which sustained heavy damage by the pounding of the surf.

“The boats were all moored close to shore,” he added.

All ports in Krabi have been closed due to the storm, Col Chaiyasit confirmed.

“Once the Storm clears and sea travel is safe, we will re-open the ports to regular shipping,” he said.