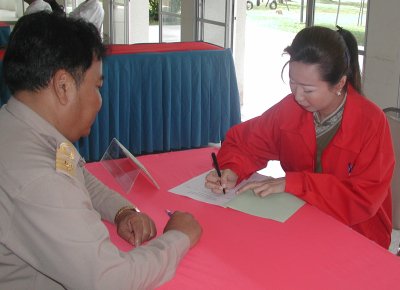 PHUKET CITY: Dr Sriyada Palimapan this morning registered her candidacy for Phuket District 1 in the April 23 parliamentary by-election, after failing in the April 2 general election to garner the minimum 20% of all eligible voters required for an unopposed candidate to secure a seat.

The Opposition parties, including the locally powerful Democrats, boycotted that poll, citing unfairness and accusing the TRT government of entrenched corruption and cronyism. This, they said, had infiltrated all levels of government, including the independent bodies that were established to work as checks on executive power.

Under such circumstances, the hamstrung democratic process rendered the poll meaningless, the Democrats said. They therefore encouraged their supporters to tick the “no vote” box on their ballot papers.

In both of Phuket’s two constituencies, the vast majority of voters did just that.

A similar scene played out in District 2, where TRT Candidate Wisut Santikul, also running unopposed, also fell far short of 20% mark. He confirmed to the Gazette yesterday that he will register his candidacy tomorrow. No candidates from minor parties have so far stepped forward.

On her arrival at Provincial Hall this morning, Dr. Sriyada was greeted by a small band of protesters carrying placards, one of which read: “The new election is a child’s game and a waste of taxpayers’ money.”

Comparing politics with a sports contest, Dr Sriyada told the Gazette today that every competition had to have winners and losers.

“Last time I got less than 20%, but this time I am asking for greater trust from the public in order to achieve my campaign promises, such as giving Phuket an international convention center and a new reservoir at Bang Niew Dum.”

She admitted, “I don’t really expect to get any more votes than the last time around, but I will do my best and I won’t give up.

“I shall leave it up to the people of Phuket to decide whether to support me,” she added.

Dr Sriyada said the high number of “no votes” showed that it was harder for new political parties to make inroads in the South than it is in other parts of the country, such as the North and Northeast.

Easing of 80-meter rule back on the agenda