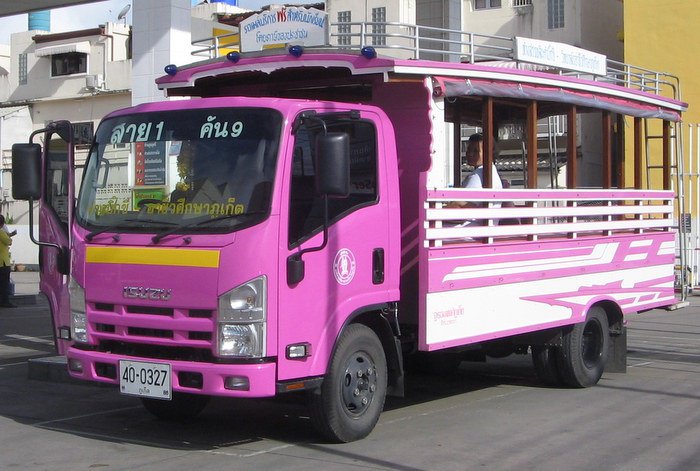 PHUKET: Legendary champion of Phuket people and the highest elected official on the island Paiboon Upatising lost his battle against colon cancer on August 2 at the age of 58, with his wife and eldest son by his side.

The former Phuket senator, suspended President of the Phuket Provincial Administration Organization (PPAO) and charter President of the Rotary Club of Patong (RcoPB), has left a legacy of local innovation, care and businesses sense. He is survived by his wife Keawta Upatising and their four children: Maetapong, Pongsapak, Peerati and Wutthichai.

“My mother and I were beside his bed when he passed away,” Mr Maetapong told the Gazette in a calm voice, just two days after his father’s death. “I told him not to worry about anything, I will take care of the family and everything for him.”

Mr Paiboon is remembered by family as a delightful man with a good voice, who was the entertainer of the group and inspired all those around him, both at home and at work.

“Mr Paiboon was a strong-willed man who paid an enormous amount of attention to his work,” Governor Nisit Jansomwong told the Gazette. “He was a politician who worked hard for the people and never gave up. He continued to work even when he became very ill.”

The well-established politician was dubbed Phuket’s ‘Pink Panther’ due to his use of pink to brand his public projects following his election as the PPAO president in 2008.

After having already served as the island’s senator, Mr Paiboon won with a landslide victory against Anchalee Tephabutra. Eleven months later, he was issued a ‘yellow card’ by the Election Commission (EC) in Bangkok for vote buying.

“When the EC first gave me a yellow card, I was unable to defend myself by any legal means. But the provisions of the 2007 Election Act are very good, so now I can defend myself in the Appeals Court,” Mr Paiboon said in May 2009.

“I feel like someone sucker-punched me in the head, but I don’t know who. Now I can find out the identity of my accuser and fight back in court,” said Mr Paiboon, whose business interests in Phuket included the Phuket Villa group of residential estates and the sole distribution rights for Phuket from Boon Rawd Brewery.

Mr Paiboon was cleared of vote-buying allegations by the Appeals Court in Bangkok on September 8, 2009. However, it is not Paiboon’s cleared yellow card that he will be remembered by, nor the corruption allegations most recently levied against him by the Office of the Auditor General of Thailand (OAG) for issues flagged as problematic in the construction of the PPAO Hospital last month.

In fact, Mr Paiboon assumed he would be quickly cleared of the allegations and return to working for the people.

“This order will give me a chance to relax and recover,” Mr Paiboon said at the time. “I think after the OAG confirms that there was no illegal activity, I will resume my position, which might be in a few months.”

What Mr Paiboon will be remembered for, however, is his vision for the island and his hands-on approach to bringing the community together.

In 2001, as Phuket’s first ever directly elected senator, and as a Rotarian, Senator Paiboon decided that founding a new, English-speaking Rotary Club would be the best way of achieving his goal of mutual understanding between the business and local government sectors on Phuket.

As such, on January 9, 2001, the Senator invited a selected group of foreign business people to attend a meeting at the Aloha Villa Hotel. During the meeting it was decided to form the RCoPB with the aim of fostering goodwill and understanding between Thai officials and the foreign business community.

“Our club members will always remember Mr Paiboon as someone who upheld the ideals of the Rotary through his actions and his legacy. We will be forever grateful for his vision and support,” Mr Wyler said.

Previous RCoPB President Brad Kenny earlier this week recalled how Mr Paiboon helped the island recover from the tragedy of the 2004 tsunami.

“My fondest memory of Khun Paiboon was from a few days after the tsunami, when he suggested the governor contact me, being a Rotarian and in the construction business, about his need to make temporary caskets,” Mr Kenny said.

The standard Thai casket was not big enough for foreigners.

“After we set up a production line, [Mr] Paiboon came by and held hands with my workers and said a prayer concerning the tragedy, thanking all of them for doing an unspeakable job as tears ran down all of our cheeks… We bonded that day, as Rotarians and as humans, with our love and despair about what had happened to our paradise island. We kept that bond until the last time I saw him a few months ago.”

For the general public though, perhaps the Pink Panther’s most visible and applauded project was the island’s first practical and low-cost public transport system: the Po Thong ‘Pink Bus’, which won a national award for ‘Local Innovation’ from the Prime Minister’s Office.

Mr Paiboon accepted the award from then-Prime Minister Abhisit Vejjajiva at Government House in Bangkok on the morning of September 17, 2010.

PM Abhisit defined the term ‘local innovation’ as any change in government-sector service with a clear public benefit.

Additional major projects backed by Mr Paiboon included plans to redevelop Bang Wad Dam, Bang Neaw Dam, anti-flood measures, the distribution of 1,000 UV flashlights that he paid out of his own pocket for to be handed out to vendors in Phuket Town to combat a flood of fake bank notes and the PPAO Hospital.

“The hospital is 90 per cent complete,” Mr Paiboon said in September 2010. “I have tried very hard to have the hospital open as soon as possible and it looks like it will open by early next year.”

PPAO Vice President Sorratham Jinda, who has been working with Mr Paiboon since he took the position in 2008, explained that it was a quickness of mind and action that had allowed Mr Paiboon to accomplish so much.

“He worked very fast and was constantly reviewing the data available before making any decisions,” Mr Sorratham said.

“We always had to layout the good and bad impacts any given project might have when we presented them to him.

“Though he demanded a great deal from us, he was very kind and respected everyone he worked with. He will be greatly missed by all of us.”

Mr Sorratham confirmed that the elected government body would continue to serve the island with PPAO Chief Administrative Officer (Palad) Watcharin Patomwattanapong as acting PPAO president until the end of term next April.