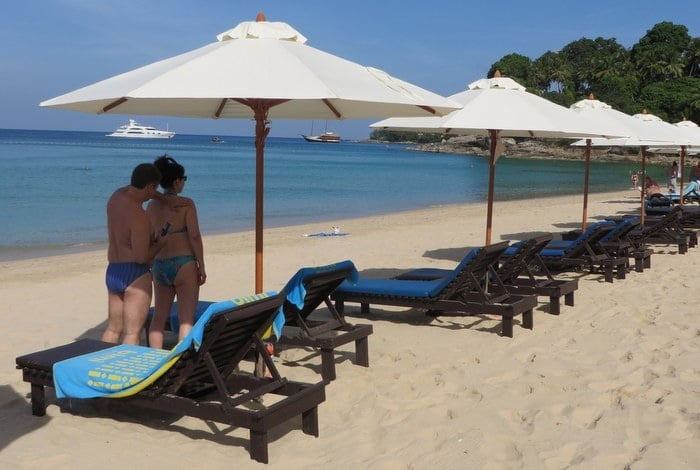 PHUKET: The island’s beach chair dilemmas will see one final meeting before the controversial subject is laid to rest, Phuket Governor Nisit Jansomwong told the Phuket Gazette in an exclusive interview yesterday.

“Prince of Songkhla University (PSU) Phuket campus will present their results to me on August 20,” Governor Nisit said. “We will consider the information they bring to the table and balance it with other factors that will weigh into ensuring the greatest benefit to the public.”

Gov Nisit launched what was to be a three-month trial for a beach management system in December that only allowed 10 per cent of the sands to be zoned for vendors, and saw a complete ban on beach chairs of all types (story here).

The following month, he was forced to take a strong public stance against those who opposed the policy (story here).

“I would like to make it clear. We will continue to strictly enforce the rules prohibiting beach chairs on Phuket sands,” he said at the time.

In June, the governor downplayed his strong stance against beach chairs, saying that he would rely heavily on a study being conducted by PSU (story here).

“We have the initial results already. We need to study and analyze specific aspects of the findings, especially how it pertains to environmental issues, economics, tourism and social management, so that our research is more valuable and conclusive enough,” Dean of Faculty of Technology and Environment Pun Thongchumnum told the Gazette shortly after the governor made it clear that the study would play a large part in his decision.

“After the new plan is set, local government will work on making the zones more attractive for tourists, and of course, no ownership. The locals who service umbrellas can help tourists with setting the umbrellas up in the zone. But the umbrellas must be put away as soon as tourists leave the beach,” Mr Pun said.

“We have come this far. I expect the best solution will be a long term plan to help Phuket achieve a bright future.”

However, the bottom line for the management plan will be what makes the most people happy, Governor Nisit confirmed.