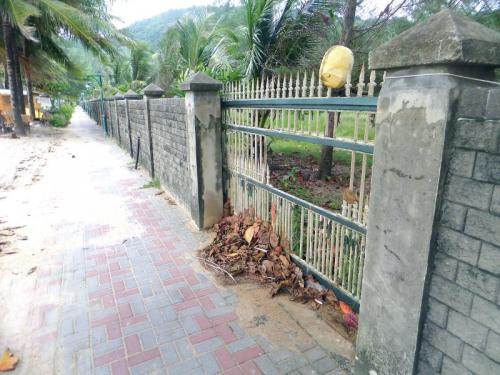 SPECIAL REPORT: Tsunami evacuation drills have become part of Phuket life since the devastating waves struck our shores in 2004. But has familiarity bred contempt for safety in the west coast village of Kamala? The Phuket Gazette reports.

PHUKET: Phuket recently hosted a full-scale tsunami drill (story here), with rescue workers practicing the actions they would take should a wall of water hit the island’s beaches once more.

Meanwhile, a stationary wall in Kamala – 150 meters long and running parallel to the beach – has struck fears into the hearts of locals that their own escape from an impending tsunami is blocked.

“Right now, all the shop owners along the Kamala beachfront are worried that they will not have enough time to run to safety if a tsunami comes,” said village chief Wattanaporn “Chai” Sanay, who survived the tsunami in 2004.

The wall in question runs 150m, end-to-end, behind the local police station and stops any direct retreat from the beach.

It belongs to the person who owns the land behind the station, and the authorities admit they are powerless to order the owner to pull it down.

“I have received many complaints from villagers about the wall behind the Kamala Police
Station,” Nopporn Karuna, a vice president of the Kamala Tambon Administrative Organization (OrBorTor), told the Gazette.

“It used to be open for everyone to walk through, but now it is closed and people are not
allowed to pass,” he said.

“I know it is private land, so we cannot order the owner to pull it down. The owner has every right to have that wall on his own land,” explained Mr Nopporn, who has been given full responsibility for all aspects for tsunami evacuation drills in Kamala.

With escape access across the private land now blocked, tsunami evacuation signs direct people fleeing a tsunami to follow the street for 250 meters – paralleling the beachfront, not going away from it.

Another chief concern is that the crowds of people who gather in the area between the police station and the beach every Friday for the local market would be penned in by the wall.

The Gazette was shown one gate at the northern end of the wall. The gate, although padlocked, is a flimsy wooden frame marked “Private”.

It is down a narrow unmarked lane on hotel property, about 150m from where the busy market is held each week, making it very easy to miss by people fleeing for their lives.

“All we ask is for the owner to put a gate in the middle of the wall to make us feel safer,” Mr Wattanaporn pleaded.

“I know the owner of the land does not want everyone to come onto his property. I understand. I don’t want to trespass, either,” said Mr Wattanaporn.

“A gate would be used for tsunami evacuation only. Anyone who has not faced this situation would not know how we feel,” he added.

“When a tsunami comes, you just run. In 2004, my wife and I ran wearing just our sarongs. We ran as fast as we could. We left everything behind,” Mr Wattanaporn said.

The southern wall on Kamala Beach isn’t the only one causing concern.

A second wall, nearly two meters tall and stretching 440m along the Kamala beachfront, frightened a Swedish tourist so much that in an email to the Gazette he vowed not to return:

“I have been visiting Kamala for many years, but now I think this will probably be my last,” he said.

“What should happen to people on the beach if a tsunami comes? As far as I can tell they would be caught in a mousetrap! This is nearly unbelievable. How can this be allowed to happen?

“Thank you for many years of pleasure; now it’s over,” he said.

How many other tourists have felt the same – and vowed not to come back – the Gazette has no way of knowing.

This second wall makes up the ocean-facing perimeter of the Kamala Islamic Cemetery at the north end of the beach. A pathway 2.5m wide runs next to the wall and is kept clear as a tsunami evacuation route, said Mr Nopporn of the Kamala OrBorTor.

“We have posted signs to let everyone know which way to run,” he added.

“When the tsunami came [in 2004], I did not jump over the wall. I just used the walkway around it. But it wasn’t as tall as it is now. After the tsunami, the Kamala OrBorTor made it higher,” he said.

“The wall now is still not too high, though. Most people would be able to jump it and run to the road,” he added, still noting that the wall stood nearly two meters tall.

Mr Jaturong also pointed out that there were two gates along the beachfront wall.

“The gates are pulled closed, but they are not locked. Anyone at anytime can pull the gates open and run through,” he said.

Whether people are aware of the potential tsunami escape routes through the gates remains in doubt.

The Gazette saw no signs indicating the gates were unlocked and may be used in case of emergency.

Mr Nopporn of the Kamala OrBortor urged people to have faith in Phuket’s tsunami warning sirens and the evacuation plans in place.

“We stage a tsunami evacuation drill once a year; please trust our system. The sirens will sound the alarm about an hour before a tsunami would arrive, but it takes only 10 to 15 minutes to evacuate everyone to a safe place,” he said.

“One is on Kuan Yak Hill, near the Andara Resort and Villa. It is on high ground. Another is near Laem Singh Beach, where we are building a shelter to store first-aid supplies. The third is at Hua Khuan village near Phuket FantaSea,” he explained.

“You can also run to Rajaprachanugroh School [near the south end of the beach] in case you cannot make it to the safe zones. The school is four-stories tall and was built very strong after the tsunami,” Mr Nopporn assured the Gazette.