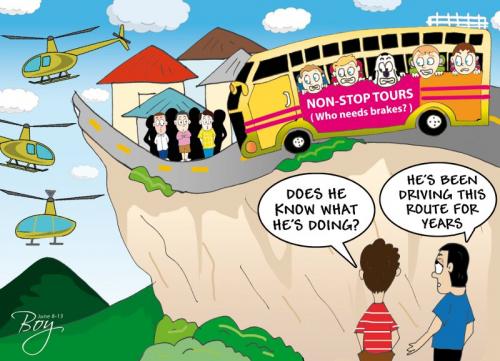 PHUKET: The latest crash of a tour bus descending into Patong highlights yet again the need for tour bus operators – and drivers in particular – to take personal responsibility for the safety of passengers under their care.

If it can be considered as such, the only good fortune in this latest tragedy is that no lives were lost and physical injuries were described by police as “minor” – though the people who suffered them might beg to differ (story here).

The mental stress suffered by the poor homeowner who had an out-of-control bus unexpectedly park in her living room for a second time this year must also be considered, along with other residents of the neighborhood who have to live with the constant dread that their property could be next.

The causes of this latest crash and all the others that have preceded it indicate that profit, not passenger safety, remains the primary concern of far too many tour companies.

We understand the need for tour companies to keep expenses down in such a competitive industry, but overworking underpaid drivers and skimping on the cost of regular and thorough vehicle-safety checks is not the place to start. The practice of throwing a set of keys to so-called “drivers” who have previous convictions for drunk driving and other serious infractions must also end, immediately.

Patong Hill road is intrinsically dangerous with its steep inclines and hairpin turns, but this can never be used as an excuse for even a single crash there – nor can any of the other meaningless escape responses, such as, “the brakes failed”; “the bus was old”; “the driver was unfamiliar with the road” or, perhaps our favorite, “it was raining”.

Due to continual refinement in the automotive industry, braking technology has made huge strides in recent decades. Standard factory-built vehicles now have braking systems on par with aircraft and the Formula 1 race cars of less than a decade ago.

The technology is there, but common-sense attention to safety continues lacking – even, if not especially, among so-called ‘professional’ bus, van, and taxi drivers here.

The ultimate responsibility for safety on any passenger vehicle must lie with the driver, so it falls to each and every tour company to not only employ truly professional drivers, but also to train them in emergency techniques and warn them of safety concerns along roadways they may be unfamiliar with. They must also do a better job of instilling a “captain of the ship” mentality.

For all these reasons, we fully support efforts by the Phuket Land Transportation Office to permanently revoke the licenses of tour companies with records of repeat offenses. Experience has taught us, however, not to hold our collective breath waiting for this to happen in Phuket’s notorious transport sector.