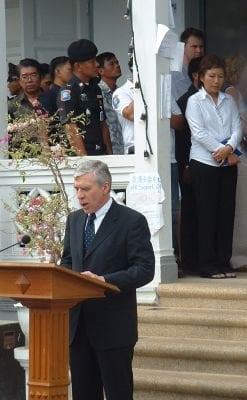 PHUKET: British Foreign Secretary Jack Straw said today that identification of tsunami victims may take months and, in some cases, identification may never be possible.

Mr Straw was speaking during a visit to Phuket, where he met survivors and relatives of some of the thousands killed by the tsunami.

He said the tsunami had claimed the lives of at least 49 Britons in Thailand, with a further 391 still missing.

He added that he had spoken with British forensic experts who had helped identify victims of the bombing of PanAm flight 103 over Lockerbie, Scotland, in 1988, and of the 2002 Bali bombing, and that they had stressed the difficulty of identifying the thousands of tsunami victims in Thailand.

He said, “There are many hundreds of dead in the mortuary areas. It is impossible to tell the country of origin of most of those poor people.

“Some victims may never, ever be identified and my heart goes out to all those who face this terrible and, I fear, continuing ordeal… [of not having the death of a loved one confirmed].

“The agony of long uncertainty for many families, and the scale of the effort still required, is totally daunting.”

British forensic experts have joined colleagues from 29 other countries in the attempt to identify as many of the dead as possible. At the same time, the Thai government is to send DNA samples from 2,500 corpses to China for analysis.

Prime Minister Thaksin Shinawatra, who escorted Mr Straw on his visit to Phuket, said it was intended to take DNA samples from unidentified bodies, then microchip the bodies to aid identification later.

The Prime Minister told the press conference at the rescue center at Phuket Provincial Hall that good preparations were being made to improve tsunami-damaged Patong and Kamala.

“The recovery is going well, better than I expected,” he said.