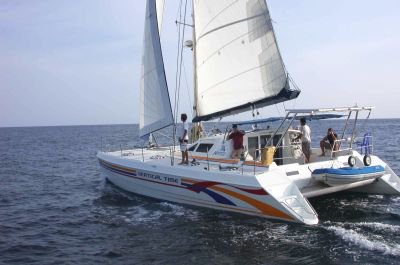 ANDAMAN SEA: The Rebak Champagne Run 2004 was a race of extremes, from lulls that left the boats lurching in sloppy waters making no headway, to fresh breezes of 10 to 15 knots. Fifteen boats registered for the Phuket-Langkawi race, the 120-nautical-mile precursor to the Royal Langkawi Yacht Club Regatta, while others joined in unofficially. As with most yacht races, the Champagne Run was not without a certain amount of controversy and misunderstanding; it had been announced in Phuket that the cut-off time for finishing would be 4 pm in Malaysia, when it was in fact 6 pm. First boat over the line, taking honors in the Racing class, was Som Tam Express, skippered by Scott Donaldson, in a time of 24 hours, 55 minutes and 37 seconds. Dai Mouse IV, skippered by Mark Hardress, won the Cruising class, while Vertical Time, with Bob Proulx at the helm, won the Multihull class and First Vision, under the command of Niels Degenkolw, was first home in the Liveaboard & Classic class. The Royal Langkawi Yacht Club Regatta starts on Wednesday. – Derek Davies