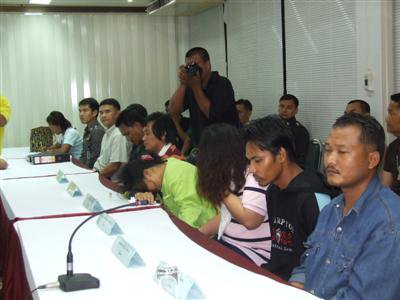 PATONG, PHUKET: The suspected mastermind behind the murder of Canadian real estate developer Francis Alex Degioanni is in police custody.

Better known as “Diana”, the Singaporean is alleged to have paid four men from Petchaburi 1.5 million baht to carry out the murder.

A total of six people have now been arrested in connection with the February 19 shooting, which took place outside Degioanni’s office in Patong.

The two suspected gunmen were identified as Somchai Mingjaiyen, 29, and Suwan Seemek, 32.

Police are hunting two more suspects believed to be hiding in Petchaburi.

Diana, who had known Mr Degioanni for six or seven years, borrowed several million baht from a friend in Singapore and gave it to Mr Degioanni as a loan. She was saddled with monthly interest payments of around 100,000 baht. When she asked Mr Degioanni to pay her back, he refused and said they had no written contract, police quoted her as saying.

Her Thai friend Netnapa Withayathammasophon, 37, helped her find people to carry out the murder, police say.

On February 19, the shooters waited near Degioanni’s office and fired at least 10 shots with two .38 caliber pistols when he arrived. The killers then ran to a motorbike driven by one of the suspects who is still at-large.

Details of how the police were able to catch the gang were also revealed. Having spoken to witnesses, investigators knew the getaway vehicle headed toward Karon.

Police checked hotel records and discovered the four suspects stayed in a room near Simon Cabaret and checked out the day after the murder.

Police showed Mr Suwan and Mr Somchai’s ID card photographs to witnesses to the murder, including the victim’s wife, who identified them as the gunmen, police say.

Mr Somchai, arrested in Bangkok on March 4, confessed that all four men worked together to kill Mr Degioanni. Mr Sumon was arrested on March 5 and others on March 6.

Police, not yet satisfied with Diana’s professed motive for the killing, continue to investigate.