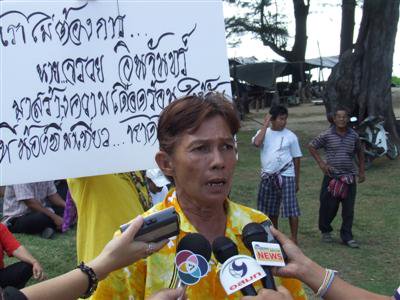 SAKOO, PHUKET: Some 100 protesters have roadblocked the entrance to Sirinath Marine National Park, hoping authorities will do away with sharply increased entrance fees that are keeping tourists away and hurting their businesses.

The new fees, which took effect about two months ago, have made access to the park much more expensive – prohibitively so for many tourists who used to visit the park regularly.

The park previously charged 40 baht per vehicle, regardless of the number of passengers.

Under the new structure vehicle access is still 40 baht, but there is an additional fee for each passenger: 40 baht per adult and 20 baht per child for Thai nationals.

Foreigners must fork out five times that amount, 200 baht per adult and 100 baht per child. However, foreigners who present a work permit are allowed in at the Thai rate, so it’s only tourists who can enjoy the ‘special price’.

The entrance fee for a single pickup filled with Thais and foreigners hoping to enjoy a day at the beach can now easily exceed 1,000 baht.

The new prices have sparked complaints about discrimination against tourists, whose numbers have dropped sharply since the new policy took effect, keeping the park quiet over the recent long holiday period.

Ms Mayuree is one of some 100 other protesters who yesterday set up a tent on the access road to the park, blocking traffic. They say they will continue the protest until the old entrance fee policy is reintroduced.

Some of the protesters were among the group of vendors operating businesses inside the park who last November refused orders from the park to remove their operations from the beachfront and relocate to a food center built for them further inland.

Park chief Charuay Inchan has held talks with the villagers, but has been unsuccessful in trying to persuade them to end the blockade.

The protesters said Mr Charuay told them the entrance fee structure was beyond his control because he was bound to abide by rules and regulations issued by the National Park, Wildlife and Plant Conservation Department.

The protest continues into its second day today.

PM says ‘no’ to bullet-proof car