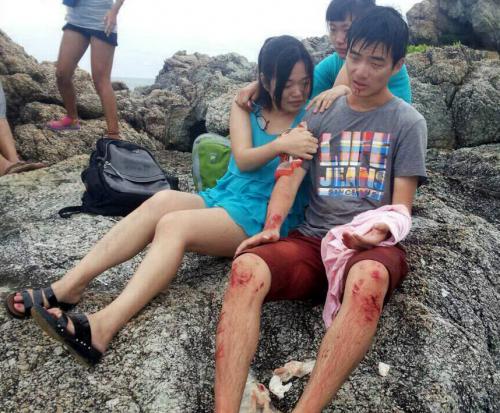 PHUKET: A search-and-rescue operation was launched late this afternoon after a Singaporean tourist slipped from the rocks at Phuket’s iconic Promthep Cape and plunged into the waves below.

Officers at the Phuket Tourist Rescue Center were notified of the incident at 5:40pm.

“Two Singaporean men slipped on the wet rocks and fell from the famous cape in Rawai this afternoon,” one rescue officer told the Phuket Gazette.

“One managed to grab onto rocks and stop himself from falling into the sea. However, the other one ended up in the water and is still missing,” he said.

Friends of the two tourists told officers that the pair had climbed out onto the rocks in order to have their photos taken, as many tourists do at the scenic cape.

“Liu Shu Jian, 21, clutched onto a rock and his friends and people nearby managed to pull him back up,” Rawai Mayor Arun Soros told the Gazette.

“But Gao Yang, 20, disappeared into the sea. He is still missing,” he said.

Mayor Arun confirmed that Mr Liu was taken to the Provincial Hospital in Phuket Town for treatment of scratches and bruises sustained in the fall.

“A team of rescue officers was assembled and started to search for Mr Gao. Unfortunately, the area is too shallow for Navy boats to get near,” he explained.

The rescue team were forced to abandon the search at 8pm due to darkness and strong waves.

“They will resume at first light tomorrow,” Mayor Arun assured.