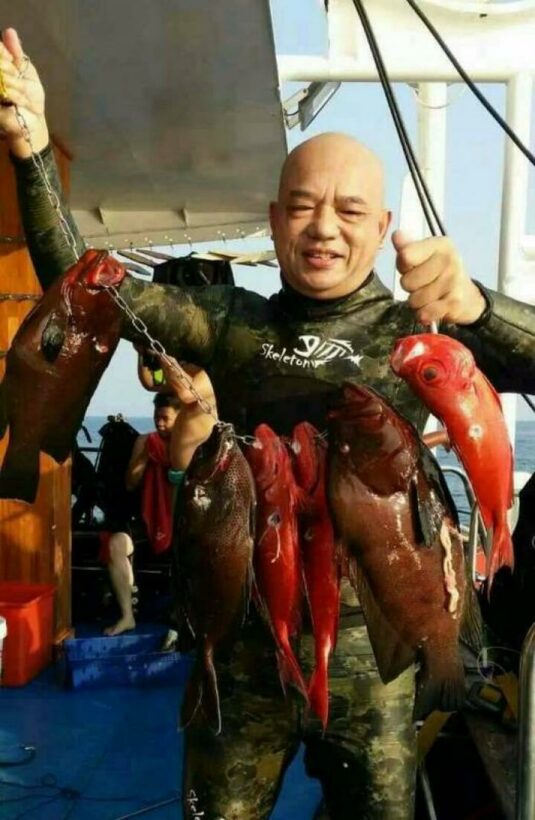 PHUKET: The Similan Island’s liveaboard diving boat that a group of Hong Kong spearfishermen used during their recent hunting excursion has been banned from entering the national park for 30 days.

Photos of Hong Kong spear fishermen showing off the bounty they hunted in the waters of the Andaman caused an uproar on social media as those online made allegations that they had been fishing in Similan National Park, Thailand’s top diving destination (story here).

Panunee, the boat that the tourists were hunting from, is touted as a 5-star luxury liveaboard. The company itself, Panunee Sea Master Co Ltd, recently announced its plans to move their base of operations to Indonesia, effective June 2016.

“We have verified that they did not fish in national park waters. However, they are registered as a tour boat, not as a fishing boat – the company was not allowed to support this activity,” Nut Kongkasorn, chief of Mu Ko Similan National Park, told the Phuket Gazette today. “It does not matter who owns the equipment, as the company is responsible for having allowed the fishing equipment on board the boat and for it being used.”

Ahead of the ban, the company’s sales manager, Walaiporn Khomson, assured the Gazette that they were taking the issue seriously.

“I was shocked when we were told about what happened,” said Ms Walaiporn. “We quickly called our staff to determine what happened, because it was a diving trip and we do not permit fishing activities.”

Ms Walaiporn was not available to comment on the ban this morning.