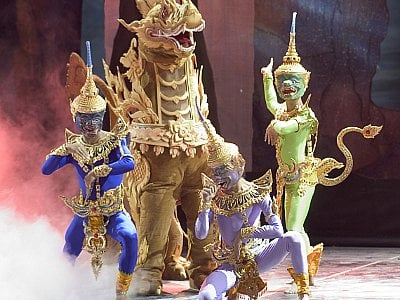 PHUKET: After six years in the making, the Siam Niramit Phuket theater is now staging its “Journey to the Enchanted Kingdom of Siam” art and culture show before packed houses of people who are taking advantage a limited-time, 399-baht-per-ticket promotional offer.

Last night, members of the Phuket media were treated to a complimentary viewing of the show, related attractions and a brief press conference by Siam Niramit CEO Pannin Kitiparapon.

Ms Pannin told the media that the company hopes to recoup its 2-billion-baht investment in the complex within five years.

She stressed, however, that the driving force behind the project was not purely financial, but rather to promote traditional Thai culture in the best way possible to foreign tourists, the primary target market.

Asked about the decision to invest in Phuket, she said part of the decision lay in the island’s uniqueness and global reputation as a holiday destination, as well as the fact that the average length of stay among foreign tourists here is five days, compared with just one in Bangkok where the company operates its flagship attraction.

As for competition with similar attractions, such as Phuket FantaSea in Kamala, she said her goal was simply to put on the best show possible and to increase the variety available to tourists.

“It’s like going to see a film at the cinema. After your first trip to the cinema you don’t say, ‘well, I’ve seen a movie now so I never need go to a cinema again’. In fact, there are many interesting genres to see and enjoy,” said Ms Pannin.

Asked by the Phuket Gazette whether the company would use a double-pricing strategy, Ms Pannin said ticket prices were the same for all regardless of nationality, but added that “tour operators bringing in large groups can squeeze us little bit” to negotiate price reductions.

Before the show, the press were invited to walk around other attractions at the facility, which included handicrafts and souvenir shops, a floating market and a “traditional village” featuring rural life in different regions of the country.

The media were treated to a buffet meal in one of the two restaurants at the cultural entertainment park, both with a view overlooking the nearby hillsides and the back courtyard where a variety of live entertainments were served up, much like appetizers to the 70-minute main show that gets underway at 8:30pm.

While workmen could be seen putting the finishing touches on some of the decor and the cavernous theater itself still smelled of fresh paint, the performers were clearly ready.

The show is divided into two acts, the first a highly-stylized depiction of rural life in each of Thailand’s four regions. The segment for the South, for example, is “South Sea Traders From Overseas”, which depicts Chinese silk merchants arriving at a traditional southern market in a junk to sell their silk.

In addition to wooden houses, replica sculptures and the like, the stage show also features a variety of live animals, including goats, chickens and elephants.

The show is an audio-visual spectacle, not high drama. A variety of choreographed sub-plots are played simultaneously – unrequited love, over-exaggerated haggling, jealous threats of violence and the like – but the impact on the viewer is more like being immersed in a music video than getting inside of the heads of any of the characters, whose stage lives are ephemeral indeed.

The second act, “Journey to the Heart of Siam”, focuses on the spirit world and starts out with a disturbing depiction of Hell before giving way to more ethereal acts featuring flying fairies, Kinnaree and a variety of other mythical creatures.

The stage is enormous, and the sets, lighting, sound, and special effects are world class.

The performance, with over 100 performers and 500 different costumes, lives up to its reputation as “Thailand’s Must-See Show”.

These seats are available on a first-come, first-served basis and must be paid for in advance at the ticket office between 10am and 4pm. No telephone reservations will be accepted.