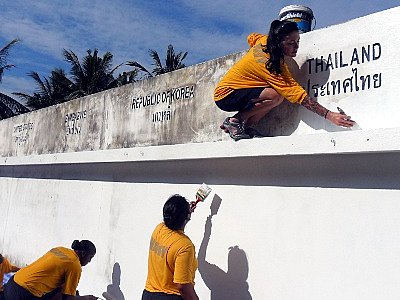 PHUKET: Members of the US Navy League in Phuket have made a preemptive strike against the deterioration of the Tsunami Memorial Wall in Mai Khao, pledging to maintain the respected site for years to come.

It appeared that the wall had never been maintained at all.

Armed with weed wackers, painting supplies and new flags, volunteers from the USS Pinckney, the US Navy League, local business Environmental Solutions Phuket (ESP), Phuket’s Tourist Police Volunteers and the MSC Company have restored the wall to respectable condition just in time for the annual memorial ceremony on Monday (December 26).

“I’ve lived in Phuket for a long time and I’ve heard over and over again, as it gets closer to December 26 each year, that the Tsunami Wall doesn’t have any maintenance budget, and it’s run down and needs a lot of work,” said Brad Kenny of the US Navy League and Patong Rotary Club.

“So this year, instead of waiting to hear about it in the news we approached the Mai Khao Tambon Administration Organization [OrBorTor] and they were thrilled to allow us to go there [and fix the wall],” he said.

The six-year-old flagpoles were warped and no longer useful when the team arrived, Mr Kenney said.

“Some of the ‘flags’ were just strings hanging from the poles,” he added.

The Navy League checked with the Mai Khao OrBorTor about their plans for the flags, but were told that there was ‘no budget’ for the project.

In response, The Navy League bought new flags for the 45 nations represented on the wall, that is the countries which lost citizens to the 2004 tsunami.

The Navy League also talked with officials and the police about the three countries represented on the wall that had recently been separated from the rest of the countries by an intersecting wall that the police had contracted to be built.

On discovering the error, police paid for the Tsunami Memorial Wall to be extended on the other side, so the three countries could again be represented.

The extension of the wall was completed about 10 days ago, Mr Kenney said.

Just a couple of days ago, Mr Kenney and fellow volunteers returned to the new section of wall to paint it and prepare it for the memorial service.

Many people visit the wall from just before the annual memorial service until the end of January, explained Mr Kenney.

After this period, the US Navy League will collect the flags from the wall and store them until next year, he said.

“We promised the OrBorTor that we will repaint the wall and cut the grass and make the site ready for the December 26 memorial ceremony. We’ve taken that on. We will do that for as long as we are here,” Mr Kenney said.