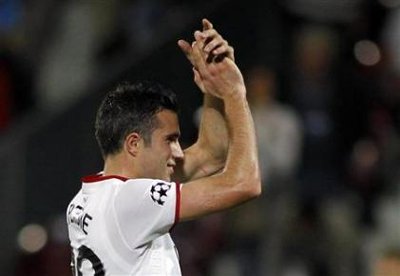 PHUKET: Arsenal coach Arsene Wenger has called on fans to “show respect” to Manchester United’s Robin Van Persie when he faces his old club for the first time tomorrow.

The Dutch striker spent eight years with the Gunners before shifting to Manchester United in the close season for a reported 24 million pound transfer fee.

Arsenal travel north to Old Trafford, where Van Persie is expected to return to the United starting line-up after being rested for their League Cup defeat by Chelsea on Wednesday.

“I don’t know (what reception he’ll get but) I hope it is a respectful one because he has played for us for eight years, he has done very well for us,” Wenger told Arsenal’s website (www.arsenal.com) yesterday.

“You want him to be respected.

“We campaign against discrimination, it was still the case last week so why should it not be the case this week?”

Van Persie has made an immediate impact for his new side, scoring seven goals in nine Premier League appearances, but Wenger said he was not wasting time worrying about the major hole he has left in his attacking line-up.

Wenger also said the team would not dwell on last year’s visit to Old Trafford, which finished 8-2 in favour of the hosts.

“I believe that of course there is an emotional aspect to a result like that.

“But on a footballing front I don’t think you give too much importance to a result like that.”

The club also announced it would travel to Indonesia during the 2013 summer break, playing a pre-season match in Jakarta.