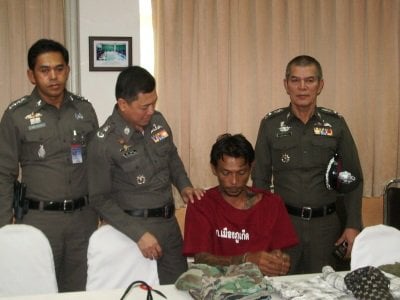 PHUKET TOWN: A serial rapist has been arrested in Phuket following a Songkran crime spree that left a man fighting for his life in the hospital.

Phuket native Sathian ‘Sakai’ Reungjinda, 36, has confessed to raping or attempting to rape 11 women in Phuket in a spate of attacks that began in December last year.

Police arrested him at his home in Phuket Town early yesterday morning. The arrest followed a day of mayhem in which he attacked two young women and stabbed a man in three separate incidents.

About 6:30am on Tuesday Mr Sathian followed a 25-year-old woman to her apartment on Soi Lor Rong in Phuket Town after she had celebrated Songkran in Patong.

He forced his way into her apartment and threatened to stab her with scissors before stealing valuables.

Dragging her to a stolen motorbike, he drove her to the Chinese cemetery on Rang Hill where he forced her to remove her pants and attempted to rape her.

When someone approached and shouted, she escaped while Mr Sathian fled the scene.

Just half an hour later he struck again, attacking a woman on Patiphat Road in Phuket Town.

Later that day, the first victim reported the crime to Phuket City Police. They matched her description of the attacker to a profile of Mr Sathian, who was released from prison six months ago after serving two years for robbery. She then identified him in a photograph.

Case Officer Yongyuth Krongmala said more victims were probably out there. “They might be too shy or ashamed to tell the police,” he said.

Mr Sathian has confessed to all charges against him and admitted sexual desire as his motive, with robbery an afterthought.

Mr Sathian also admitted to stabbing 22-year-old Songkran ‘Kae’ Saednam around 5:30pm on Tuesday in an altercation in Chalong.

“As this case was brutal, the punishment could be up to 20 years in prison,” said Maj Gen Pekad.