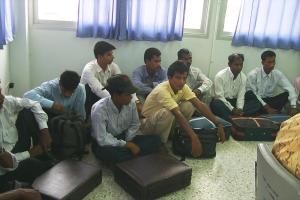 THALANG: Phuket police have nabbed 37 men as they tried to enter the country on fake visas in a breach that has ramifications for national security and posts a question mark over the effectiveness of the Immigration Department. The men, in two large groups, had already passed through airport immigration counters by presenting Bangladeshi passports when police, acting on information supplied to them, closed in and arrested them. One group of 24 was arrested in vehicles on the main road near the airport entrance at about 7:30 pm yesterday and another 13 were arrested at the airport at 9 am today. Pol Col Apirak Hongtong, Deputy Commander of the Phuket Provincial Police, said that even though the men appeared to hold Bangladeshi passports, some or all of them might be from other countries, making the case an issue of national security. “We’ll interview them one by one. We’ll check where exactly they are from,” he said. He said this police action was a first for Phuket. He told the Gazette that three leaders of the illegal operation were arrested with the first group last night, causing a slightly farcical scene at the airport when the second group arrived today. “The 13 men were walking about in the airport,” he said. “Nobody had come to pick them up because the leaders were already arrested.” Each of the men carried a case and all wore slacks and white long-sleeved shirts. Police seized a total of US$5,110 cash (about 229,950 baht), 7,250 baht in cash, cash in other currencies, two air tickets, four mobile phones and 37 passports from the men. Governor CEO Pongpayome Vasaputi said at press hearing at Thalang Police Station this morning that he will send a letter to the Immigration office. “There’s clearly a loophole,” he said. “They will have to be more strict about checking people coming in and be more careful when checking visas.” The Governor said he believed that Immigration officers would be investigated. “If the officers at Immigration didn’t intend to let these people pass through the check point, then they may have to be retrained,” he said. The leaders of the illegal groups could face 10 years in jail but Pol Col Apirak said, “We will have to wait for the court to decide.” At present there are about 200 Bangladeshi people in Phuket, said the Governor. Some of them make a living here by selling food, others work as tailors. “People who employ people who don’t have work permits or who come here illegally will be given stiff penalties, too, because they are also human traders,” he said.