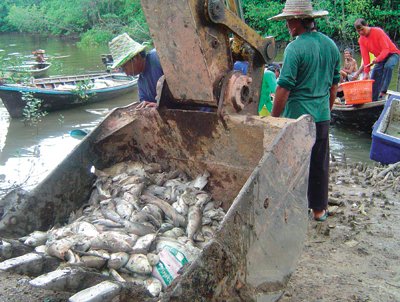 PHUKET CITY: A solution to Phuket’s waste disposal crisis appears at hand now that a Malaysian firm has agreed to build a second power-producing incineration plant at Saphan Hin.

Currently the island generates more than 500 metric tons of waste a day, an amount that has been rising by 7% annually and is expected to reach 1,000 tons a day within 10 years.

All 19 of Phuket’s local administrative districts are required to send their waste to the municipality’s incineration plant at Saphan Hin for disposal. The plant, completed in 1999, was designed to incinerate only 250 tons a day – less than half the amount the island currently generates. The remainder is landfilled in a 120 rai area behind the plant.

More than 1 million tons of trash has already been collected in that area, which is surrounded by coastal waterways, mangroves and fish farms.

A study commissioned by the city found that building a second power-producing incineration plant near the existing one with private-sector investment was the best solution to the problem.

The provincial administration then authorized the city to seek private-sector investment to build the plant on a nine-rai site of Forest Department land.

Under the contract, the plant will burn a minimum of 300 tons of waste per day for a period of 15 years. PJT Technology Co Ltd will be paid 300 baht per ton, plus income from the sale of electricity generated and sold to the local grid. The company would also be able to request a rate increase not exceeding 7% in any three-year period.

PJT, which has completed a similar project in Malaysia, submitted technical specifications that show the trash will burn at temperatures exceeding 950 degrees celsius, that pollutant emissions will be held within government standards.

The plant, which will take 600 days to build, would produce 5 megawatts of power per day and have have two chambers, each capable of burning 300 tonnes of trash a day.

Total investment is expected to be under 1 billion baht and work will begin as soon as land consignment issues are completed by the city.

Mayor Somjai said that when the project is completed it will get the island’s waste disposal problem under control for at least 15 years with no investment by the state.