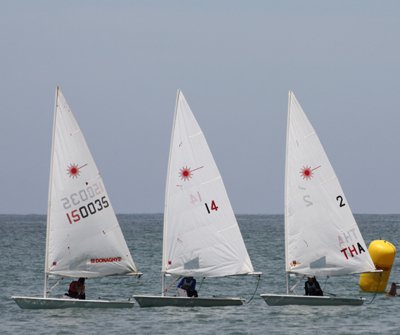 PHUKET: The second edition of the Phuket Dinghy Series took place off Nai Yang Beach on October 15 and 16 with 33 sailors in contention for honors.

Organizers selected Nai Yang for this edition as part of three different racing areas, with the intention of allowing sailors to experience a range of conditions and test their seamanship throughout the three event series.

Light winds graced the first race, which is unusual for Nai Yang, a popular venue for kiteboarding activities during Phuket’s low season.

Fortunately, the conditions developed favorably and even proved challenging to participants from Sattahip, Phuket and other parts of Southern Thailand.

Sattahip-native Anapat Ngarmdee continued his winning ways from the first series in the Optimist Class, with five wins from six races. Despite a third place in race three, Anapat secured class winner for the second series event.

The battle for second place came down to consistency with Sukanya Saimarn eventually beating Akapoj Kankeaw into third.

In the Laser Class, Trirat Manthong scored three wins from six to take first overall from Chut Dawruang and Jittawat Boonrat, in second and third respectively.

The Phuket Dinghy Series was established by the Phuket King’s Cup Regatta in 2010 to promote and encourage sailing in Thailand by involving young people in the sport. Supported by the Yacht Racing Association of Thailand, the Royal Thai Navy and the Province of Phuket, the 2011 series will conclude on November 19-20.

The Phuket Gazette and PGTV are proud sponsors of the King’s Cup Regatta.