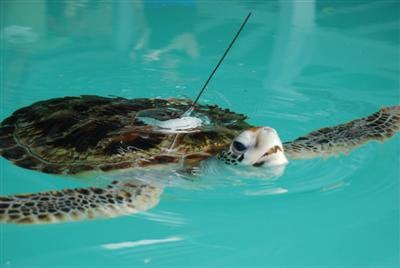 PHUKET CITY: Researchers from the Phuket Marine Biological Center (PMBC) have fastened GPS electronic tracking devices to the backs of eight young green turtles, which were released off the coast in Phang Nga. The small GPS transmitters will transfer important research data back to the PMBC at Cape Panwa.

The project marks the first time the PMBC has used such technology to gather tracking data on non-adult green turtles.

In a recent study, four adolescent hatchery turtles fitted with GPS devices were released near Mannai Island in Chonburi. Months later, two of the young turtles were still sending signals, from waters off Nakhon Sri Thammarat and Surat Thani.

Although the numbers are too small to be statistically significant, the researchers are heartened by the 50% survival rate because green turtles hatched in the wild have only a 1% chance of survival.

Turtles born and raised in a hatchery and released when they are bigger and stronger have a greater chance of survival, the initial GPS data seem to indicate.