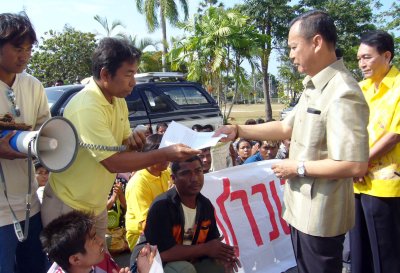 Pratan was fishing with five other sea gypsies, including Alim Hadsaitong. They were fishing by hand with divers using a surface pump with attached air hoses.

K. Alim alleged that while three of them dived and the other three waited on the surface, a person from a nearby resort arrived on a jet-ski and cut K. Pratan’s oxygen hose.

K. Pratan suffered decompression sickness following his rapid ascent to the surface for air. He was taken to Vachira Phuket Hospital, where doctors ordered him not to dive for 30 days.

The jet-ski driver also threatened to crash his jet-ski into other sea gypsies who fished there, K. Alim said.

A complaint of attempted murder was filed at Chalong Police Station on February 1, K. Alim said.

Fishing is the sea gypsies only livelihood, K. Alim told the Governor. Since the province began promoting tourism, sea gypsy villagers have been repeatedly threatened by hotel or resort owners who attempt to prohibit them from fishing along beachfronts where resorts are located.

“We think that we have the right to use our country’s natural resources,” said K. Alim, “yet many times we have been threated by tourism business operators and then told we had to be patient.

“But this time it is too much. We can’t accept it. We would like know why the province allows this situation to continue because we don’t want to have any problems with anyone.”

The Governor promised the villagers fairness in the investigation.