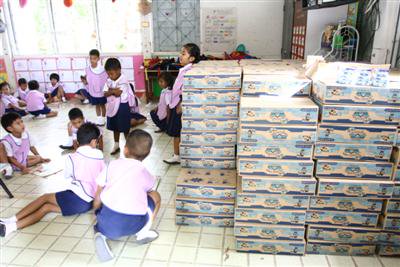 PHUKET CITY: The Phuket Public Health Office has released test results indicating that milk provided to government school students under the free “school milk” scheme is below standard in terms of nutrition, but safe to drink.

The province sent samples of both ultra-high temperature treated (UHT) milk in cartons and pasteurized milk in bags to the center.

The researchers found the non-fat milk solids content of both the pasteurized and UHT milk were measured at 8.17% and 8.22% by weight respectively, both both below the standard of 8.25%.

Random sampling for total protein and fat content in both types of milk revealed 2.6% by total weight, both below the standard of 2.8%.

Dr Pongsawas said his office will notify the milk producer, the Nong Pho Dairy Cooperative plant in Ratchaburi province, warning them to improve the quality of the milk so that it meets Ministry of Public Health standards.

The below-standard nutritional content of the milk was unrelated to the incident at the Laem Panwa School, which was the result of improper transport and storage, he reiterated.

The industry attracted attention after dairy farmers staged several protests just as the multi-billion-baht school milk project has been facing a barrage of allegations about collusion and poor-quality milk.

Yesterday the Phuket office of the public sector Anti-Corruption Commission reported that there are grounds to suspect that the project is mired in corruption.

Justice Minister Pirapan Salirathavibhaga said that as the school-milk scandal implicated many political-office holders and high-ranking government officials, he would forward the case to the National Anti-Corruption Commission.

The probe into the school-milk project was not politically motivated, even though many implicated figures were considered members of the “old power” clique, he said.

Prime Minister Abhisit Vejjajiva was this morning quoted in the Bangkok press as saying the government will overhaul the free milk procurement system to make it more transparent.

Phuket roads among Thailand’s most dangerous