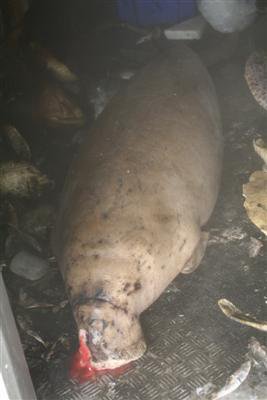 A ferry found the female dugong on February 27 and its crew brought the 1.6-meter, 86-kilogram carcass to the Phuket Marine Biological Center (PMBC) for examination.

The examination, which took place this afternoon, revealed that the dugong appeared to have been in a healthy condition right up to the moment of death.

Veterinarian Sontaya Manawattana told the Gazette that “sea grass was still left in her mouth, proving that the dugong was eating food only moments before she died. This indicates that she was healthy.”

It is suspected that the mammal died as the result of an encounter with fishing equipment.

“The dugong population numbers about 250 in the Andaman Sea and around 50 in the Gulf of Thailand. They are in danger of disappearing from the Andaman Sea altogether, so they need to be protected,” said Dr Sontaya.