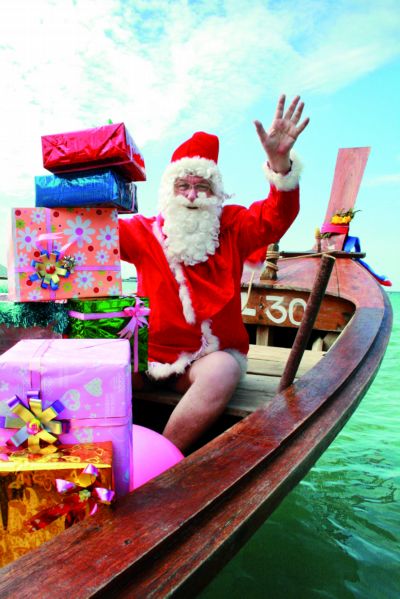 PHUKET: In an exclusive, impromptu interview with the Phuket Gazette earlier this morning, Santa Clause – spotted arriving at a Phuket beach by long-tail boat on the last of his deliveries to the island’s good boys and girls – said he plans to take some time out here.

Mr Clause said he had been thrown off his sleigh and dumped in the sea when his reindeer became “disorientated” on the approach to Patong Beach. Fortunately, a local fisherman had plucked him from the water and taken him inland so he could finish his work.

“The reindeer were distracted by the bright lights and cacophony of beer-bar music and someone screaming ‘tonight, tonight’, over and over again at 90 decibels,” said Khun Santa.

“I want to try out these wonderful jet-ski things and have a nice long body massage,” he said.

Mr Clause volunteered that he might invest in some land and seek part-time employment as an Elvis impersonator if he can get a work permit. He admitted that his deliveries earlier today had been conducted without such a permit, and confided that he had no visa since he’d landed in Thailand near Koh Kaew where  there were no Immigration facilities.

As for his reasons for wishing to hang out in Phuket for awhile, he said he was simply stressed out.

“I can’t keep up with the pace anymore. They don’t make toys like they used to, and everyone is emailing and texting me non-stop with their Christmas lists now,” he complained.

“The X Station 6 is coming out next year and we have to test every one of them before delivery. Since Grand Theft Auto came out, the elves have been slacking and are now rather aggressive,” he said.

Asked which resort he’d be staying at, Mr Clause said he was perfectly happy camping out under the stars on the beach.

But anyone hoping to see this currently illegal alien is going to have difficulty spotting him.

“I’m going to shave off my beard and put on shorts, a muscle top, sandals and socks to blend in with the other tourists around Patong,” he said.

Asked what gifts most Phuketians had been given this year, Mr Clause mumbled something about a bad Internet connection out of Thailand and not knowing for sure what everyone wanted. Pressed for further details on this, he said nothing, smiled, opened an old cloth bag and handed this reporter a stack of discount coupons for tailor shops and tuk-tuk rides.

Numbed, I watched in silence as the kind old man wandered off in quest of a beach chair.

Child labor ‘not a big problem’ in Phuket