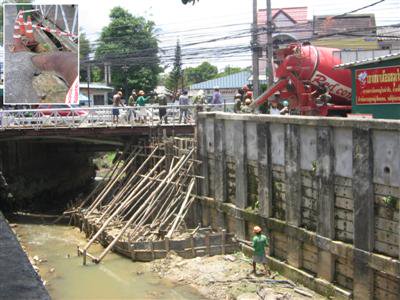 PHUKET CITY: Workers from the Phuket Rock Company toiled hard over the weekend making repairs to part of the Samkong Bridge, which supports two lanes of traffic on Yaowarat Road.

The bridge, built in 1970, passes over Klong Bangyai near Bangkok Hospital in the busy Samkong part of Phuket City.

Problems with the bridge began last year, when a retaining wall on the upstream side of the bridge collapsed into the klong, exposing the foundation to erosion.

Early this year, a temporary barrier made of timber and metal sheeting was put in place to prevent further erosion, but heavy March rains continued to undermine the foundation, causing two sections of the road shoulder to collapse through.

The municipality put traffic cones around the two danger spots and put up signs warning pedestrians and motorists of the dangers.

Work on a more permanent solution began on April 11, when the Phuket Rock Company began design work on a new concrete retaining wall under a 278,000 baht contract.

Sawai Junsang of the Phuket City Public Works Department said work is proceeding on schedule and should be completed by May 15.

After creating a section of wall to divert water away from the project area, they erected forms and began pouring concrete into the new metal-reinforced retaining wall over the weekend.

The forms were removed this morning and the new wall, which includes an opening to release wastewater into the klong, appears solid.

The Samkong Bridge, built in 1970, sustained further damage last week when a tuk-tuk slammed into the concrete guard rail on the downstream side, seriously injuring the driver and leaving the guard rail hanging together only by metal reinforcement bars.

Municipal officials advise the public to proceed past the work site with caution, but say the bridge is still safe to use.

Phuket may gain from bullish view on Thai markets