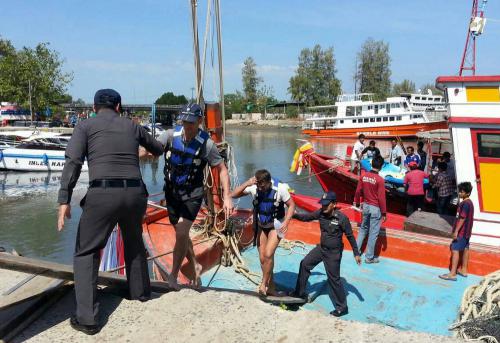 Maxim Abaturov, 37, and Valerii Grakhouskii, 38, were three kilometers from Phuket when a seal in the front of their two-man vessel began to let in water.

Although the kayak remained afloat, it could not support the weight of the men, who ended up in the water clinging to it.

“We received a call at 1:40pm from the captain of Aong Chamroen 3, reporting that he had just picked up two tourists floating in the sea,” Marine Police Inspector Chatchai Sakdee told the Phuket Gazette.

“We organized to meet the boat at the Jirawanit Port in Rassada to pick up the tourists. They are both safe.”

Officers from the Phuket Tourist Police had the men safely returned to their rooms at the Village Coconut Island Beach Resort and Spa on Koh Maphrao.

“We kept the kayak as evidence so we can determine what exactly went wrong,” Lt Col Chatchai said.