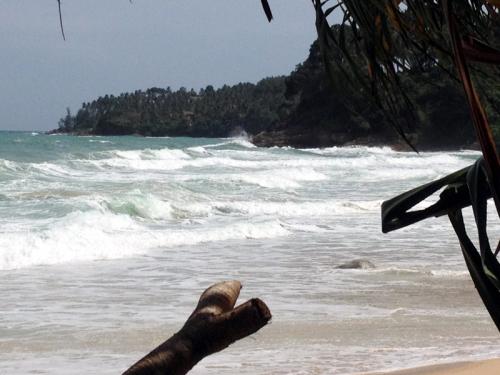 PHUKET: A proposal to post “Double Red Flag Rip Current” warnings at Phuket beaches gained momentum yesterday after a fit Russian tourist ignored a red warning flag and was caught in a flash rip, leading to a daring and dangerous rescue by members of the Surin-Bangtao Surf Lifesaving Club.

The incident prompted lifeguards to issue a flash rip warning at all west and south facing beaches along Phuket’s west coast.

Lifeguards were on patrol only 150 meters away as the unsuspecting swimmer ignored the red flags and warning signs on Surin Beach and headed for deeper water, one lifeguard explained to the Phuket Gazette.

“As soon as he entered the water, two surf rescue lifeguards were on their way to warn him. But by the time they arrived, it was already too late. The intended warning had become a serious rescue situation,” he said.

The Russian man had jumped directly into a flash rip current, which is a hidden “river” of water flowing swiftly out to sea. Often these rip currents are present where the waves are smaller, and to the untrained eye this may look like a good place to enter the water.

Onlookers watched as the two experienced lifeguards reached the victim, and began to tow him to shore. All three were pounded by heavy surf for nearly six minutes as they made their way back to safety.

“The outgoing tide bumped the existing rip current up to incredible strength and speed. The escape area to tow the victim to shore was very narrow, if we missed it there was another rip on the other side which was pulling through exposed rocks. It was a very dangerous situation. It could have taken us all,” said one of the lifeguards who carried out the difficult rescue.

Phuket’s lifeguards and ocean safety experts are beginning to understand more clearly how, and when, beach swimming conditions are most severe and likely to result in tragedy. Entering the ocean in the wrong spot during this time of year will almost certainly result in trouble for all except expert surfers and lifeguards.

“My idea is to identify when all the danger factors co-exist, and issue a ‘Double Red Flag Rip Current’ warning, in the hope that people will take the danger more seriously,” said the lifeguard.

“The flags will have international symbols for ‘No Swimming’ and ‘Rip Current’ clearly visible. If we can clearly mark the rip current areas and keep swimmers from going there, we can save lives, maybe even our own,” the rescuing lifeguard said.

The lifeguard explained that the main danger factors that create killer rips were:

– High tidal variations of over 2.4 meters, which usually occur in the two days on either side of a full moon

– Surf one meter and above with high wave frequency

“If the first three exist, but the weather is raining and stormy, most tourists avoid the beach, and we are usually spared,” explained the lifeguard. “But if the weather is sunny, we know there will be swimmers trying to enter the water. If they enter near the rip, it is almost certain they will be in trouble right away.”

Another factor is that the “low” season of yesteryear, when few people entered the water, is now the “green” season. During this time of year the number of beachgoers and swimmers has markedly increased along with record numbers of tourist arrivals on Phuket.

“All beach hotels large and small, as well as the media, should be warning their customers of the severe danger which we predict will last until this coming Wednesday, and then begin to ease. Many hotels have an ‘in-house’ television channel which would be perfect for displaying the warning,” said the lifeguard.

“If everyone does not take this seriously, I fear more lives may be threatened or lost over the next five days,” he added.

“If conditions improve in the meantime, we will inform the Phuket Gazette to cancel the warning,” the lifeguard explained.