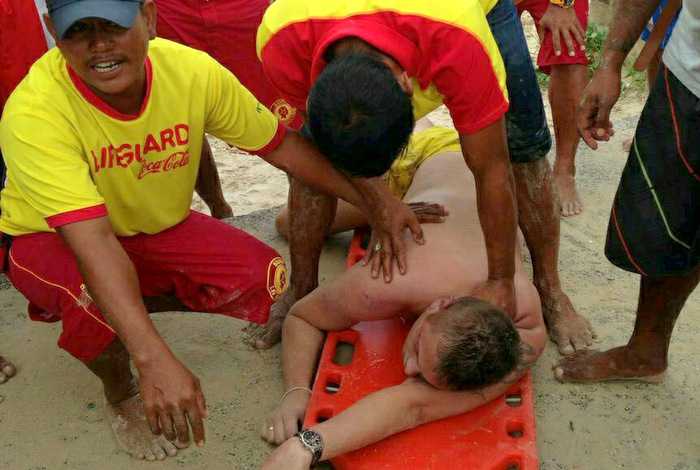 PHUKET: A Russian tourist died after he fell and struck his head on a rented jet-ski he was riding in strong surf at Patong Beach today.

“He rented a jet-ski at about midday,” said Maj Weerapong Rakito of the Patong Police. “He fell and hit his head on the jet-ski while riding large waves.”

Patong beach guards rushed into the surf and recovered Mr Muryndin, who was unconscious, Maj Weerapong told the Phuket Gazette.

“He was rushed to Patong Hospital and then transferred to Vachira Phuket Hospital in Phuket Town, but he was pronounced dead on arrival there,” Maj Weerapong said.

The fatal accident today follows a renter who was riding one of the vehicles in a “no jet-ski” zone at Surin Beach and came dangerously close to hitting a surfer yesterday.

A foreign witness described the incident in a letter to the Gazette: “A jet-ski renter narrowly missed a Surin Beach surfer during a high-speed into shore run, and then buzzed past children playing in the surf, as horrified tourists looked on.”

Just last week, a tourist escaped serious injury after she was run over by a vehicle towing a jet-ski trailer on Kata Beach (story here). Fortunately, she sustained only minor cuts and bruises.

After learning of the “near-miss” at Surin Beach, Phuket Marine Office Chief Phuripat Theerakulpisut vowed to call together jet-ski operators in the area to ensure that no such incident would occur again.

“I was not aware of the near-accident. This should not have happened. Jet-skis are not allowed on Surin Beach,” he said.

“The jet-ski might have come from the Bang Tao jet-ski club. I will look into it and track down more details. I will also call together operators in the area and members of the local government to discuss what can be done.”

Mr Phuripat also reiterated one of the rules that was put into place last week, when he announced that jet-skis would in fact be allowed to operate in designated areas of the beach, separate from swimming zones (story here).

“If operators cannot follow the rules and maintain safety for everyone, we will have no choice but to cancel their permits to be on the beach,” he said.

“We have set our rules to make sure that these businesses are controlled and safe. Coming into a banned zone is unacceptable and dangerous. This cannot happen again.”

The same standards have been applied to every single jet-ski operator on the island, Mr Phuripat said.

“Jet-ski and swimming zones must be separated for safety reasons,” he said.

“When the seas become calm during the high season, local offices will provide buoys so that the separate zones are clear. Jet-skis cannot come near the swimming zone.

“And to be clear, the entirety of Surin Beach is a no-jet-ski zone.”

Mr Phuripat has yet to comment on the death of Mr Muryndin today.