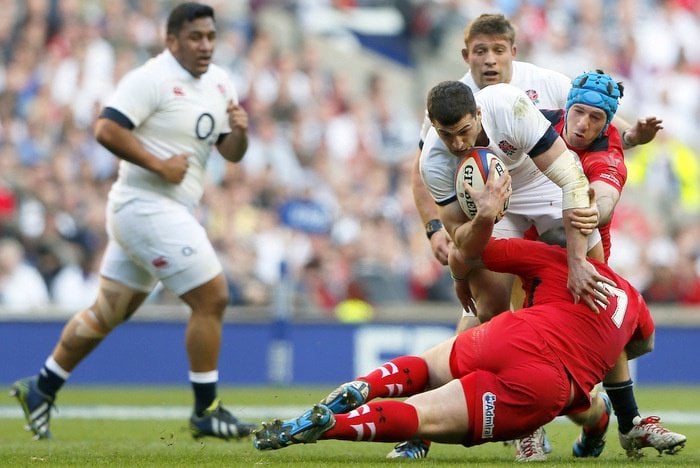 PHUKET: England must “smash everything in red”, maintain cool heads and silence a raucous Millennium Stadium crowd when they meet Wales in their Six Nations championship opener in Cardiff on Friday (kickoff 3:05am Saturday, Phuket time), England World Cup winner Neil Back said.

Stuart Lancaster’s side suffered a humiliating 30-3 defeat on their last visit to the Welsh capital in 2013, a painful loss that ended their grand slam hopes and handed Warren Gatland’s side a second successive title.

“England have got to silence the Welsh crowd. That’s their job,” Back, an integral part of England’s 2003 World Cup-winning side, told Reuters.

“The first 15 minutes of each half will be absolutely critical to England’s aspirations in this game.

“Drive the Welsh into their half, get on the scoreboard and smash everything that is in red. If they can create a quiet Millennium Stadium that will be a truly beautiful thing.”

The Friday evening blockbuster is a pre-cursor to their World Cup pool meeting on Sept. 26 and Back said it was vital for England to land a “psychological blow”.

But the former flanker is concerned about England’s preparations for the Six Nations, the number of injuries that have forced Lancaster’s selection hand and the lack of settled players in key positions.

“England’s major concerns at the moment are not necessarily with the level of injuries because we have quite a depth of players, better than anyone else,” said the former British and Irish Lion.

“It is not a settled team – particularly that midfield partnership. They are up against a more settled Welsh backline.”

Jonathan Joseph and Luther Burrell will be the starting centres in an inexperienced backline and although Back said their selection “showed intent” by Lancaster, England must find a midfield balance.

“We do not know our combination – 10-12-13. We’ve some great players to choose from…Burrell and Joseph are very exciting but two weeks ago Burrell came out second best against (Wales centre) Jamie Roberts,” Back said in reference to Northampton Saint’s European Cup home defeat by French side Racing Metro.

Back believes one way England can subdue the Welsh is by reverting to the type of forward-dominated power game that brought a 27-17 victory over Australia in their final Autumn international.

“We saw in the Six Nations last year they started to build on their attack philosophy but, with the injuries now, I think they are going to have to go back to type and look to build on their dominant set-piece performance against Australia,” Back said.

Whatever the outcome, Back said England had some way to go to produce a team capable of landing the Webb Ellis Cup in October.

“We’ve got a team that can beat anyone but what we haven’t proven is that we can win consistently. To win a World Cup you have to win seven games on the bounce and England have not done that. We have to start that charge now.”

Back picked out fullback Mike Brown as “world class” – he expects the Englishman and Welsh counterpart Leigh Halfpenny) to have a “battle royal” – but while he said England had plenty of “good players”, few could as yet be called “absolutely world class”.

“A number have got the potential to be world class but because they’ve not done it on a consistent basis, they cannot be labelled that yet,” he added.

Back was taking to Reuters as the official ambassador for breakdown specialists Green Flag, an official partner of Aviva Premiership Rugby.

England have named flyhalf Danny Cipriani in a 25-man squad. Joining the fray will be England number eight Nick Easter, who returns for the first time since the 2011 World Cup.

The 27-year-old Cipriani, who has not been included since last summer’s tour of New Zealand, and Easter, 36, who last featured in the World Cup quarter-final defeat by France, are set to start on the bench at the Millennium Stadium.

England will go into the tournament are without six injured players, with David Wilson, Joe Launchbury, Courtney Lawes, Tom Wood, Ben Morgan and Owen Farrell all sidelined, but Lancaster believes he has brought in quality players to replace those who are missing out.

After the tourney opener, all rugby fans’ eyes will be on the Irish as they mount their potentially history-making defense of the title on Saturday (kickoff 9:30pm, Phuket time), with scrumhalf Conor Murray fit to take on Italy in Rome.

With half back Johnny Sexton ruled out with an injured a disc in his neck, Murray’s role becomes critical in the Irish campaign as his partnership with Sexton has been key to Ireland’s rise to third in the world rankings following victories over South Africa and Australia in November.

Injuries vex the Irish squad’s selection, as backup scrumhalf Eoin Reddan was to resume training only on Tuesday and the relatively untested Kieran Marmion of Connacht sits waiting in the wings. The remarkably durable number eight Jamie Heaslip is a minor doubt for the trip to Rome, and Leinster teammates Sean O’Brien and Cian Healy have been included in the squad after long spells out with injuries.

“The Italians are hugely strong at home and in their first game [of the tournament], you have seen that over the last few seasons,” said Irish coach Joe Schmidt.

“They have put together huge performances. We’ve got to be ready for that.”

In the third match of the weekend, France will take on Scotland in Paris on Saturday, with the kickoff at midnight, local time.