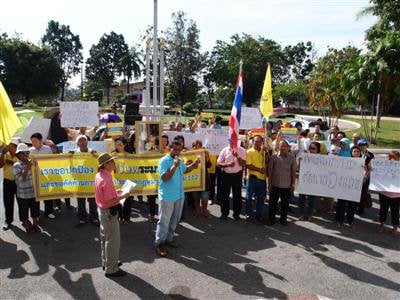 PHUKET: A small group of Phuket royalists gathered at Phuket Provincial Hall to show their opposition to efforts by the Nitirat group of scholars in Bangkok to amend Chapter 2 of the Constitution and article 112 of the Criminal Code, which deal with lese majeste.

The group of about 20 protesters arrived at 10am with a letter of protest, which was accepted on behalf of Phuket Governor Tri Augaradacha by his deputy Somkiet Sangkaosutthirak.

“Nitirat is not a group of scholars, but a band of betrayers,” read one.

Mr Don read a declaration in support of current lese majeste law and critical of the Nitirt’s stated intention of changing it in the name of free speech.

“They propose to amend the Article 112 of the Criminal Code and Chapter 2 of the 2007 Constitution in a way that would allow people to criticize the monarchy. They even offer examples of monarchies in the other democratic countries to support their ideas,” said Mr Don.

“I do not see this as a way of fostering harmony in our nation. Furthermore, decreasing the power of the King would actually destroy the stability of our Kingdom… create even more conflict. I think the Nitirat Group should direct their efforts to prevention and suppression of corruption among the Thai politicians, which has become the worst problem here,” he added.

“When His Majesty the King Bhumibol Adulyadej first ascended to the throne he vowed ‘I will reign with righteousness for the benefit and happiness of the Siamese people’. In the intervening 60 years HM The King has kept his promise, helping Thailand though all crises. He is the heart of our country, and his accomplishments cannot be compared with kings of other nations,” he said.

The group’s protests would continue if the Nitirat Group did not desist, he vowed.

Vice/Gov Somkiet said: “I am very happy to see Phuket people come out to express their love and loyalty to the monarchy. I will pass this letter on to the Ministry of Interior, who can forward it to the Government. In this way they will know that Phuket people disagree with amendment of Article 112 and Chapter 2 of the Constitution.”