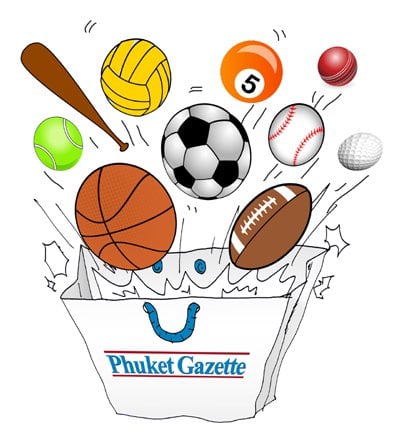 PHUKET: Grab your balls, bats and rackets for another nosedive into this week’s world of local and international sports events with the Phuket Gazette.

In tennis, read about the final to end all finals that pushed Rafael Nadal and Novak Djokovic to their break points at the Australian Open. Maria Sharapova may need another relaxing visit to Phuket after her demolition at the hands of Victoria Azarenka in the same tournament.

In football news, “God” is leaving Thailand and moving to India for a reported fee of half a million dollars. The Liverpool faithful walk on in English cup competitions after defeating both Mancunian premier teams. The Magpies won’t scavenge any FA Cup silverware this season after having their wings clipped by Brighton. And in local news, Portrait FC are in the frame for another AFL title.

In sailing, the 2012 Bay Regatta had its own mixed bag of conditions to deal with on the first day of racing, but the lack of wind won’t keep the partying at bay over the next few days. We reveal why the Phuket King’s Cup Regatta is helping Thai sailors to become a world force in the sport.

Continuing the water sports theme, a sharp intake of breath is needed before reading Isaac Stone Simonelli’s article on freediving and the sport’s Andaman competition next week.

Finally, Phuket’s cricket ground, the ACG is officially open for business. Its been open for a while, but organizing dignitaries to attend an official ceremony is more difficult than making a Frenchman understand the Duckworth-Lewis system of scoring.

Pick up a copy of this week’s Phuket Gazette out on news stands today.

What’s the difference between Terry and Suarez?