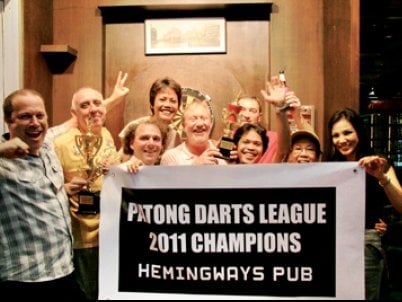 PHUKET: The cricket season in Phuket got underway with a friendly between last year’s Island Furniture league champions, Patong CC, and new boys the Thanyapura Tigers (TT) at Cherng Talay.

It was a baptism of fire for TT with Patong batting first and posting a score of 214 for 4 after 20 overs. In reply, TT scored 39 runs in 8.4 overs thanks to a clinical fielding display by Patong. The captain of Patong, Richard Folds said, “it was good to finally get on the field after all the net practices. TT have talent and I’m sure will improve as the season progresses.”

The Hemingway’s B team lifted the Patong Darts League champions trophy recently after narrowly defeating their home-venue counterparts, the Hemingway’s A team.

The deciding game saw Tong of Pogue Mahone defeating Ryan of Shakers in a three-match final in the lucky draw, sudden-death playoffs.

The lucky prize draw left nearly every player with something in hand to go home with, while Aom of Beach House won a free dive training course donated by Kon-Tiki dive tours.

A special prize of the evening went to Jim of the Beach House. After receiving no less than three toilet seats for finishing last in the league in previous seasons, Jim this year received a wooden paddle. Apparently a wooden spoon wasn’t good enough.

The Beach House, The Mouse Hole and Celtic bars were looking for players for the new season that was due to start on October 18.

With no entry fees for players and a free meal for team members on competition nights, players of all standards are encouraged to join. Email chrishusted@gmail.com for details.