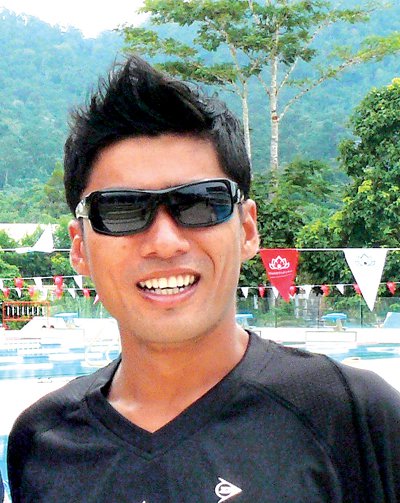 PHUKET: Jaray Jearanai of Phuket has reached a new high in his athletic career after completing the pinnacle of endurance events, the Ironman World Championship in Hawaii, in a time of just over 11 hours.

This was an outstanding accomplishment for the Laguna Phuket marketing executive considering that it was his first attempt at the full Ironman course, and only weeks after he completed the Ironman 70.3 World Championship in Las Vegas.

Jaray, 31, sponsored by his employer Laguna Phuket and the Thanyapura Sports and Leisure Club (where he trained to compete in Las Vegas and Hawaii), crossed the Kona finishing line in a time of 11:04:35 after completing the swim course in 1:04:35, the bike section in 5:48:27, and the marathon in 3:51:22.

Exhausted yet ecstatic, Jaray expressed his delight with his own efforts and the support he has received.

“It was the toughest experience of my life and I’m so happy to have completed it. It’s always been my dream to take part in a full Ironman – I just didn’t expect my first one to be the World Championship in Kona alongside some of my biggest heroes,” Jaray said.

“This race and the Las Vegas Ironman 70.3 have been incredible experiences and I’m so grateful to Laguna Phuket for helping to make my dreams come true,” he added.

Jaray now holds the unique distinction of being the first-ever Thai to compete in back-to-back Ironman and Ironman 70.3 World Championships in the same year.

Australian Craig Alexander won the event in a new course record of 8:03:56 and Chrissie Wellington of Great Britain took the women’s title in 08:55:08.

The annual Ironman World Championship in Kona, Hawaii is considered the most difficult one-day endurance event, comprising a 3.8km swim, a 180.2km bike ride and a 42.1km marathon, with its 1,800 entry slots highly coveted by triathletes worldwide.

Ironman 70.3 Asia-Pacific Championship at Laguna Phuket is sponsored by the Phuket Gazette and PGTV.