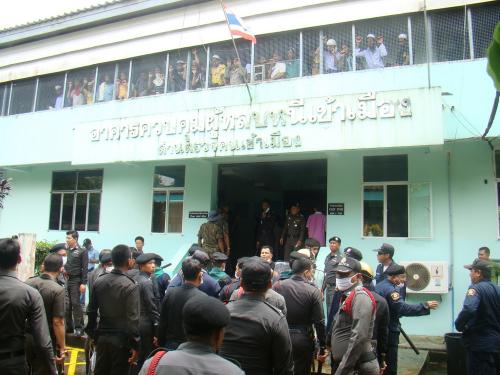 PHUKET: The Rohingya refugees’ rebellion against their captivity during the Muslim holy day Eid-al Fitr yesterday was a pre-planned attempt to escape the facilities and leave Thailand, Phang Nga Immigration Police told the Phuket Gazette today.

“The refugees were convinced by visitors to protest and attempt to escape to another country,” Phang Nga Immigration Inspector Neti Khanboon said.

Lt Col Neti was unable to confirm or deny if the visitors who allegedly incited the unrest were part of human-trafficking gangs believed to be targeting the refugees (story here).

“We inspected the detention cells upstairs after the refugees were transferred to other centers yesterday,” Lt Col Neti explained. “The place was destroyed, with signs of damage to CCTV, toilets and the ceiling.

“We offered them more than enough food and took care of them. I don’t know what to say about what they just did,” he said.

Reports about the cramped conditions and the confinement of the refugees for an undetermined length of time led the Minister of Social Development and Human Security, Paveena Hongsakula, to visit the Phang Nga facilities last month.

After her visit, Ms Paveena declared the detention and trafficking of Rohingya through Thailand to be the subject of clear human rights issues and a national security threat (story here).

All the refugees have been transferred to other facilities due to the damage caused during the riot, Phang Nga Provincial Police Commander Chalit Kaewyarat told the Gazette.

“A lot of people living in the same small place can make them tense,” he said. “They simply wanted to leave Thailand, because they have been detained here for over six months.”