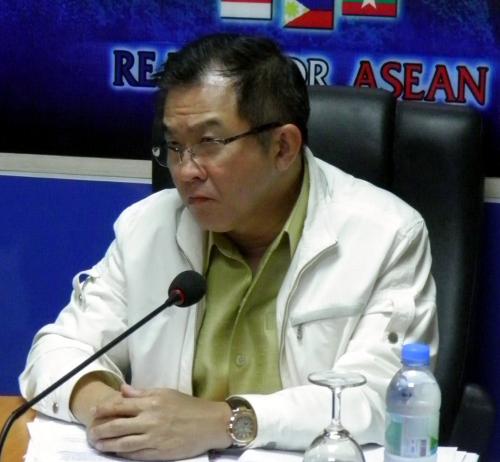 PHUKET: Deputy Interior Minister Wisarn Techathirawat says the presence of the media encourages Rohingya refugees to “act-up in front of the camera” in order to get sympathy.

Mr Wisarn was at the Phang Nga Immigration center yesterday to inspect the facility, following a Rohingya riot there earlier this month.

“The media often knows that the Rohingya are arriving even before the police do,” he said.

The “feigned pitifulness” of the Rohingya reported by the press is giving Thailand a bad name, Mr Wisarn said.

He called for special measures to be taken to find the Rohingya places to live, and said that government parties and officials must do more to respond to the needs of Rohingya refugees.

The rebellion at the Phang Nga Immigration center on August 8 occurred at the end of the Muslim fasting month, when refugees asked to be able to pray together and were refused (story here). The men, detained in cramped conditions for months, became enraged and damaged their detention cells as they tried to break out.

The rioting was contained, and subsequently, 261 men were transferred to police stations in Phang Nga; 24 remained at the Phang Nga Immigration center.

A visit to the same facility in July caused the Minister of Social Development and Human Security to declare the Rohingya’s detainment there a matter of national importance (story here).

“It’s a clear human rights issue and national security threat,” said Paveena Hongsakula, Minister of Social Development and Human Security. “The refugees must be well taken care of while they are displaced in Thailand.”

“There is not enough space here for all of them, we can accommodate only 250,” he said.

It has been necessary to transfer hundreds of Rohingya to other holding facilities, he said.