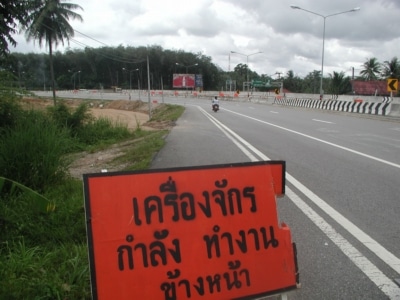 THALANG: Road construction to straighten the notoriously dangerous Kho En “death bend” on Thepkrasattri Rd has been delayed, with just 2% of the roadwork finished on the project that began June 28 and was scheduled for completion by December 24.

The Phuket Highway District contracted Chaiyakorn Co Lt to expand the 440-meter section of the four lane road and decrease the angle of the curve for 15 million baht. So far, cones have been placed to limit traffic to two lanes passing through the curve and land has been cleared for road expansion. Chaiyakorn Co Lt will not receive any payment until the project is 25% complete.

Chaiyakorn Co Lt will be fined 6,000 baht per day after the contracted completion date of December 24, until the project is finished.

Suriya Juvatee Deputy of Phuket Highway District Engineer said, “Now the construction is only 2% done and it will be late. The contractor will be rushed because they must pay 6,000 baht per day in fines.”

Nearly four months since the project began on June 28, construction has been continually delayed because Chaiyakorn Co Lt has failed to find investors for the project.

K. Suriya explained, “The construction company is not ready financially because they must find the money to complete the construction. The contract states that Phuket Highway District will only began to pay the company money after 25% of the work is complete.”

The sharp curve is particularly dangerous because the road is four lanes wide, making it possible to take the bend at high speeds by straying into other lanes. While under construction, the road has been limited to four lanes and speed bumps installed to slow vehicles’ speeds as they pass through the curve.

“If a driver is approaching the Kho En curve at a high speed they don’t have to slow down because there are four lanes, which is very dangerous.

“We fixed this by putting traffic cones in to reduce the roadway to two lanes. We have found this is much safer for drivers,” K. Suriya said.

The curve, dubbed the Kho En “death bend”, has been scene of numerous accidents throughout the years.

K. Suriya added, “Kho En curve is very dangerous for drivers and there are a lot of accidents. One of the accidents resulted in a car swerving and crashing into a home, then people formed a group asking to either have the road closed or fixed. From that point on we have been trying to make it safer.”

The move to straighten the curve followed the death of the Yam Chanwong, 55, who was killed when her motorbike was crushed by a pick-up truck at 10 am on July 8, of last year.

Her death sparked a protest by a mob of about 200 villagers who blocked the road with tents, demanding to speak with Vice-Governor Worapoj Ratthasima.

With Thepkrasattri Rd being the only road on and off the island, the villagers quickly created a three-kilometer tailback.

The mob agreed to let traffic pass only after Vice-Governor Vorapoj Rattasima came to discuss the problem with leaders at 2:30 pm that day and gave his assurances that he would order the responsible departments to solve the problem as quickly as possible.

After the protest last year, Wirat Bailad, who was a member of the Mai Khao Tambon Administration Organization at the time, said that accidents happened at the curve on average around twice a week but that this incident was particularly bad.

He added that villagers had been calling for the problem to be solved for a long time but no one had been interested.