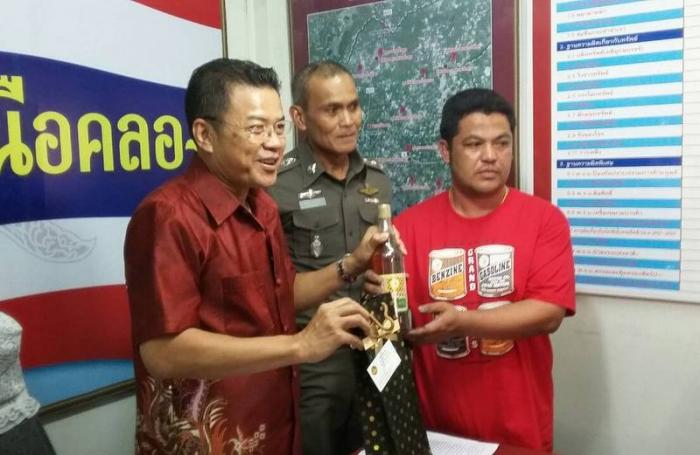 KRABI: A Krabi van driver surrendered himself to police this morning after a video clip of him driving erratically and attacking a foreigner on a motorbike went viral on social media this week.

The video shows van driver Pornthep Petsut, 32, shouting from his vehicle at a motorbike driver and attempting to cut him off before stopping the van to get out and hit him on the head.

The video clip was recorded and posted by university student Somboon Ajariya, who captured it with a dashboard camera on his car.

“I saw that the foreigner had merely blocked the van driver’s way, but the driver chased after him and started shouting at him, before getting out to hit him,” Mr Somboon wrote in his Facebook post.

“This is utterly damaging for Thailand’s reputation,” he pointed out.

Although Mr Pornthep confessed to the Nuea Khlong Police, he maintained that the motorbike driver had instigated the incident by swearing at him and hitting the mirror of his van with the motorbike.

“I was driving some Chinese tourists from Ao Nang to the airport and we stopped at a tea stall on the way. He parked next to me, knocking the mirror of my van twice with his bike,” Mr Pornthep told the police. “I did not act right away but I was very angry.”

Regardless, Mr Pornthep was charged with assault.

“We are looking for the foreigner in order to question him about the incident, but have yet to find him. Mr Pornthep has been brought to justice, but we want to ensure that it is fair to both parties,” said Nuea Khlong Police Superintendent Thaksin Pochakorn.

Krabi Governor Pinit Boonlert dealt generously with the situation by presenting a bottle of honey to Mr Pornthep as a reminder to be kind to tourists. He also asked the people of Krabi to act as good hosts and support tourism in the province.

Charges yet to be filed against killer speedboat driver