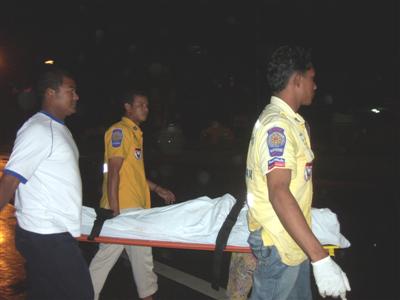 PHUKET: A man was killed last night when his motorbike slammed into the back of a 10-wheel truck parked in the breakdown lane of Phuket’s deadliest road.

The tragedy occurred at about 10pm on Thepkrasattri Road inbound, in front a furniture store near the Srisoonthorn Tambon Administration Organization offices.

Thalang Police identified the deceased from his Thai ID card as 24-year-old Jatupon Boonkoed, a native of Udon Thani.

Local residents said Mr Jatupon was riding in heavy rain and without a crash helmet, factors that may have limited his visibility and caused him to crash his Honda Click into the back of the much larger vehicle.

Rescue workers at the scene noted that the deceased suffered a broken neck and was partially decapitated. His body was still pinned to the vehicle by his crushed right leg when they arrived.

Phuket Kusoldharm Foundation workers transported the body to Thalang Hospital for further examination and storage until it is claimed by relatives.

The Phuket Gazette urges all readers to exercise extreme caution when operating vehicles during the current spell of very rainy weather.

According to the Thai Meteorological Department 24-hour forecast issued at 7am today, “rather strong” southwest monsoon conditions prevail over the Andaman Sea and the Thailand’s Southwest Coast. Shipping should proceed with caution and small boats should keep ashore.

There will be widespread thundershowers covering more than 80 per cent of the Andaman Coast area, with heavy to very heavy rain in many areas.

Winds will be Southwesterly at 20 to 35kmh.

Phuket Retail: Staff productivity, not piracy, the key to success