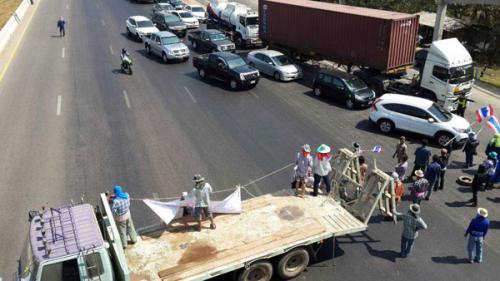 PHUKET: The main highway linking Bangkok to Phuket and the rest of Southern Thailand has been closed by rice farmers protesting the government’s failure to pay for rice produced and delivered under the controversial rice-pledging scheme.

The blockade is in effect on Petchkasem Road in Ratchaburi, about 100km west of Bangkok.

The blockade affects all traffic travelling between the capital and Hua Hin, Samui and Phuket, as well as the rest of Southern Thailand.

Farmers at the protest site, estimated at more than 1,000, said they would keep the highway closed until they received payment from the government.

While battling the ongoing street protests in Bangkok, Caretaker Prime Minister Yingluck Shinawatra is also under investigation by the National Anti-Corruption Commission (NACC) for her role in the government’s rice-pledging scheme (story here).

Under the scheme, the government pledged to pay rice farmers double the market rate per tonne of rice with the plan of stockpiling the rice and selling it at a premium later on.