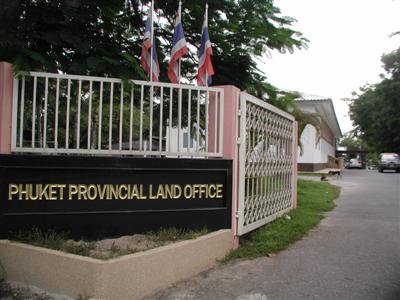 PHUKET CITY: In an indication that the Phuket real estate market is not quite as robust as some like to suggest, statistics released by the Phuket Provincial Land Office reveal that income on land and property sales transactions was down over 70% year-on-year over the first four months of 2009.

There were a total of 1,945 transactions involving land title deeds for the period from January to April.

The total value of land transactions for the period was Bt883.24 billion baht, with the vast majority (Bt881.52bn) for land with pre-existing structures.

Income for the same period this year was just Bt97.8m, down almost 71%.

The largest reduction was in business tax collection, which is normally paid for by the seller at a cost of 3.3% of appraised value. This figure fell from Bt132.0m to Bt18.2m year-on-year.

There was a similar downward trend in income from transfer fees, normally paid for by the buyer at 2% of registered value. These plummeted from Bt104.3m to Bt13.6m year-on-year.

Withholding tax, paid for by the seller at 1% of appraised value, fell from Bt85.7m to Bt58.6m year-on-year.

Property analyst Bill Barnett of thephuketinsider.com  told the Gazette that the figures reflect a “wait and see” attitude on the part of Thai investors, many of whom speculate by buying several units at a time without the intention of living in them.

Describing the figures as somewhat volatile, he cautioned that they are not a reliable yardstick for trends in the upscale villa market, where many sales are to foreigners on a leasehold basis or though offshore accounts, and thus not included in the Land Department figures.

Land tax could spur the economy