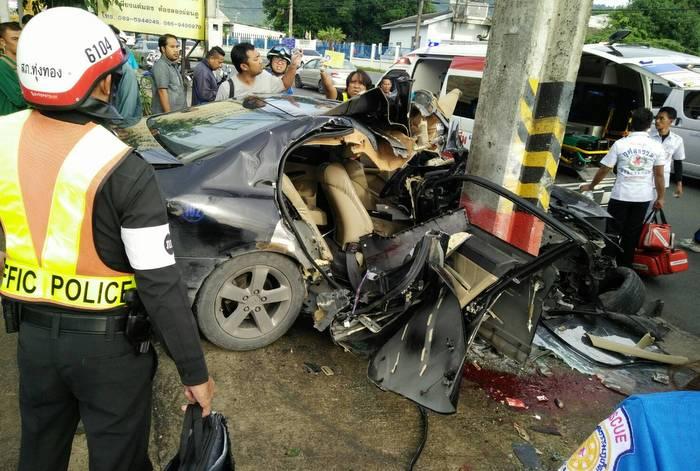 PHUKET: An airport taxi driver pinned against the steering wheel of his vehicle had to be pried out after the car crashed into a power pole this morning.

The driver, Chakri Jaruwateekul, is in serious condition at Vachira Phuket Hospital. He was unconscious after rescue workers cut him out of the Honda Civic.

“It took about 30 minutes to get him out of the car before we could take him to hospital,” said Kathu Police Lt Col Ampholwat Saengruang.

The incident occurred at about 7:30am today, near the water supply plant on the Phra Phuket Kaew Road.

The car was totalled.

“Witnesses said the driver had been eating at a local restaurant before heading to Patong. He made a u-turn to Patong, after which his car crashed into the pole. The impact pinned him behind the wheel,” Col Ampholwat said.

He told the Phuket Gazette that the police will question Mr Chakri when he regains consciousness.