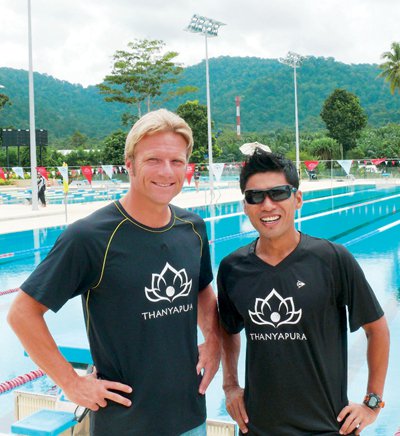 PHUKET: Jürgen Zack has won the European Ironman Championship five times, the Ironman Austria twice and has been Ironman Australia Champion. This supreme German athlete has also had three top ten finishes at the most gruelling distance event in the world – The Ford Ironman World Championship in Kona, Hawaii.

With just eight weeks to go before the island’s Tri-Fest beginning on November 27 with the Phuket Triathlon followed by the Ironman 70.3 on December 4, Director of Triathlon Training at Thanyapura Sports and Leisure Club, Jurgen Zack will offer training tips and advice for Phuket Gazette readers who intend to participate in these most demanding of events.

Swimming, Biking and running are wonderfully healthy sports. They require relatively low-cost equipment, and you can enjoy them almost anywhere on your own.

But if you want to do it right I suggest joining a triathlon group or use the knowledge of an experienced coach. Getting advice from an expert helps to avoid “beginner mistakes”.

These fundamental errors include:

2. Too high or too low intensity or quantity of workouts.

By the time I started competing in triathlons in 1983 there were neither Tri-Clubs nor Tri-Coaches.

I was on my own and made a lot of these “beginner mistakes”. I went through trial and error.

Fortunately, I managed to join an elite bike group with experienced veterans.

I was the goofy young triathlete, and they looked at me like I was an alien. But I did learn a lot from this group of experts such as; Choosing the right gear; Pacing myself; Cornering and downhill skills; Training methods.

I started from zero, but with the right guidance I became the fastest cyclist in triathlon for more than a decade.

Over 23 years as a professional triathlete I had the chance to learn a vast array of triathlon training techniques and I was inspired by these world-class training partners over those years.

Now I am here to pass on that expirience to anybody who wants to start in triathlon or wants to be the best that they can be!

Join a group with the right mentor. Just doing it – doesn’t do it. Do it right.