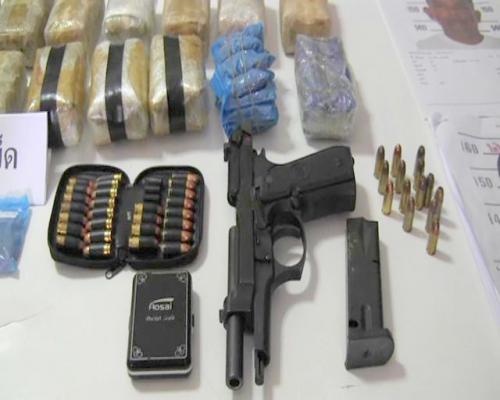 PHUKET: Police in Krabi province, across the bay from Phuket, have arrested three suspects and seized more than 48,000 pills of ya bah (methamphetamine) in what is being hailed as the largest drug bust in Southern Thailand.

“We learned that a shipment of drugs was to be buried at a predetermined location near a large tree in Sai Thai Subdistrict, near Krabi Town,” Col Boonprasert explained.

“We set up a surveillance unit, and when the suspects arrived we moved in to arrest them. The suspects fled, but we discovered where they were staying – at a rented house in nearby Krabi Noi Subdistrict. So we quickly organized a raid on the house,” he said.

In the house, officers seized as evidence 48,738 pills of ya bah and a range of items valued at a total of 17 million baht.

However, all three denied the charges.

“They claim the ya bah belongs to Juthimas Hitagae from Surat Thani and Suriya Monchatin from Nakhon Sri Thammarat,” Col Boonprasert said. “They said they were paid 20,000 baht to keep the drugs in their house.”

Police are now searching for Ms Juthimas and Mr Suriya, he added.

Sophon Suannakarat, chief administrative officer of Krabi Town District, said the drug haul was the largest in the South of Thailand.

“Undercover operatives reported that the suspects regularly received shipments of 200,000 pills at a time from a supplier in Pathum Thani,” he said.

“The suspects then distributed the drugs throughout Southern Thailand through their own drug network,” he added.