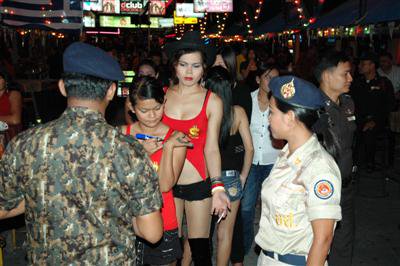 PATONG, PHUKET: Drug testing taking place at popular nightlife entertainment venues in Patong has yet to result in any arrests of foreigners in connection with illegal drug use.

Kathu Police are focusing mainly on Thai patrons and the bar staff in their mandatory urine testing, which gives on-the-spot results for three ‘recreational’ drugs: ya bah (methamphetamine), ya ice (crystal methamphetamine) and ya E (Ecstasy).

Of the 204 people the police have tested up to and including Saturday night, eight turned up positive when their urine samples turned the tell-tale purple.

Those testing positive are subsequently given more accurate blood tests to confirm the results and decrease the likelihood of a “false positive” result.

First time offenders are required to register with the Phuket Public Health Office and undergo treatment for drug abuse.

Each night in Patong, three testing teams, including police and public health officials, conduct the surprise raids from 9 pm to 11 pm.

The initiative follows a policy directive issued by Deputy Prime Minister Suthep Thaugsuban to crack down on drug abuse.

The raids are scheduled to continue over a 90-day period that began March 6.