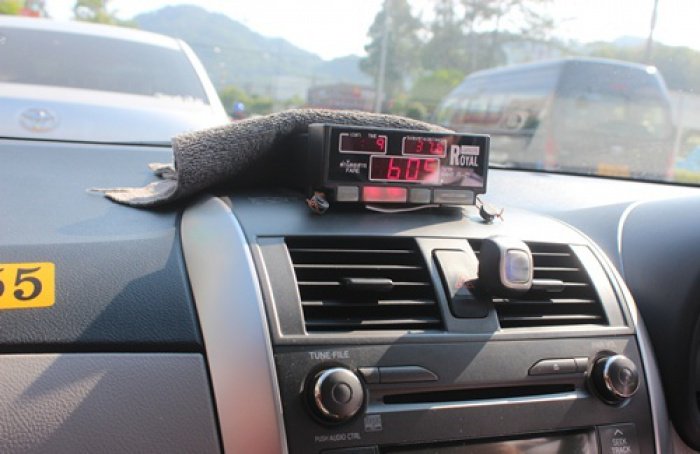 PHUKET: Six metered-taxi drivers were caught and charged for using tampered meters in a swoop initiated by the Phuket Land Transport Office on Friday.

“We mounted the raid after many complaints were filed by both tourists and locals about high fares being charged for metered taxis in Phuket,” said Phuket Land Transport Office [PLTO] Chief Teerayout Prasertphol.

The six drivers were fined 2,000 baht each for replacing the meters that they had registered with PLTO.

“The starting fare is normally 50 baht, increasing by 12 baht increments per kilometer. However, these meters were clocking up higher fares than that,” Mr Teerayout said.

“Many people ask why we don’t check taxis at the airport, but we can’t, as the taxis have yet to start a trip there. The route to Patong is the best spot to catch them.”

PLTO officers said they will continue to focus on the problem and execute more raids in the future.

Despite complaints about high taxi rates, Mr Teerayout told the Phuket Gazette that fares would not be reduced in Phuket.

“The standard fare will be maintained. However, we will work hard to deal with taxi fraudsters who increase fares,” said Mr Teerayout.

In light of the current raids, Governor Nisit Jansomwong will be issuing a press release next week about the upcoming launch of the mobile phone application GrabTaxi that he tabled earlier this month (story here).

“I think the GrabTaxi app will help improve the taxi system in Phuket. Since the customers and the drivers will be dealing with each other through an app, less fraud will occur,” Mr Teerayout added.