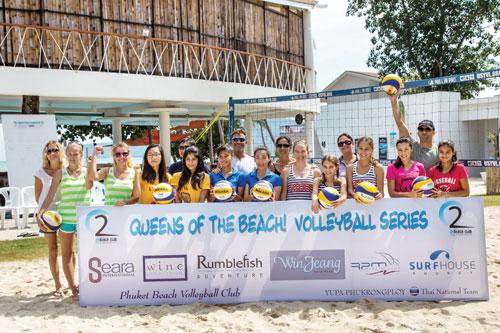 PHUKET: With the success of the PTT School Tournament, held in conjunction with the recent 2013 FIVB Beach Volleyball Phuket Open, organizer Bob Selznick wanted to give students another chance to develop their skills on the sand by hosting a new tournament.

“I promised the girls that I would teach them, and hold a two-person per side beach volleyball tournament for them soon after [the PTT School Tournament]. They had only played six on six, now they love to play two on two like the pros,” said Selznick.

So it was, that the first round of the “Queens of the Beach” volleyball tournament kicked off last Saturday, December 7 on O2 Beach Club’s dedicated sand court in Chalong. Competition at the tournament was fierce, featuring lots of hard-fought, close games, with play running from 1pm until after dark under the lights. O2 Beach Club also provided a DJ for the event to spin some heart pumping music, complemented by a play-by-play commentary from CJ Prieur of Seara Sports.

The tournament started off in a round robin format, with each team playing a match against each other. After this round was finished, the top third and fourth team played for the third place trophy. This turned out to be the match of the day, with Suzy Lee and Nandita Sethi of Headstart International School playing Violett Parkina and Laurelyne Leger of QSI International School. The Match went three close sets, with the last set going back and forth, with Violett and Laurelyne pulling ahead to win 15-13.

The Championship Match was between Kaya Freeman of PIA and Eli Kostikove of Headstart against Didi Lemke and Jariya Prieur of Headstart. It was a two set match, and despite Didi and Jariya battling hard to the end, they couldn’t find an answer for Kaya and Eli’s ball control and power.

At the end of the day’s play, the top three teams were: Third place – Laurelyne Leger and Violett Parkina from QSI; Second place – Jariya Prieur and Didi Lemke from Headstart International; and First place and the first “Queens of the Beach” Kaya Freeman from PIA and Eli Kostikova from Headstart.

According to organizer Bob Selznick, future tournaments will be held every four to six weeks, during the series, with the next tournament set to be held in early February due to popular demand.

Selznick comes from an illustrious sporting background in Volleyball, with his father Gene being the number one player in the world, Indoor and Beach, for almost 20 years. His older brother Dane is also a number one in the world on the Beach and has coached in three Olympic Games as well as coaching the number one women’s beach volleyball team in the world – Misty May and Kerri Walsh – for six years.

Keep checking our online Phuket Sports pages, join our Facebook fan page or follow us on Twitter @PhuketGazette for the latest local sporting news and action.

Be forewarned about 4G in Phuket