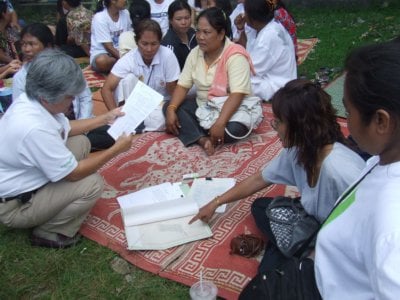 PHUKET: A crowd of about 60 protesters set up camp near Phuket Provincial Hall this morning to demand that the Phuket Governor step in to resolve a conflict over land entitlement where construction of Panason City Village is underway.

The protesters claim that some home owners have been tricked into giving up their homes and that others are being pressured to leave the village so their homes can be demolished to make way for the new project.

The new housing development is being built on 78 rai next to Soi Thep Anusorn off Chao Fa East Road in Wichit. Click here for a previous story.

Although the villagers have occupied the land for the past ten years, many of them do not have title deeds for their homes.

Protesters told the Gazette that about half of the 60 home owners are still paying off mortgages on their homes.

The protesters said this morning that they will continue to protest until Governor Wichai agreed to mediate in the issue and ensure the safety of village residents and their homes.

Deputy Governor Smith Palawatwichai later met with the protesters and agreed to inspect the village today. He will then meet with Governor Wichai Phraisa-ngop tomorrow morning to further assess the situation.

OPINION: TAT should do more for Phuket festival