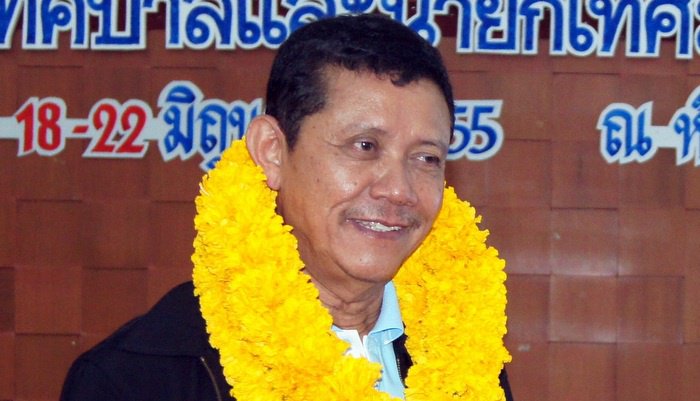 PHUKET: Prosecutors have yet to decided if evidence provided by police against the mayor of Karon is strong enough for them to press charges for his alleged involvement in a billion-baht-beach scheme and the ‘taxi mafia’.

Karon Mayor Thawee Thongcham, who has ruled the popular beach area of Kata-Karon for more than a decade, was arrested on June 4, 2014 (story here).

Police charged him with conspiracy and aiding illegal activities carried out by criminal associations.

At least 15 people, including Mr Thawee, were then accused in September 2014 of illegally issuing permits for local beach vendors to use public beach land in a billion-baht-beach scheme (story here).

Despite Region 8 Police Deputy Commander Paween Pongsirin’s confidence in the case, the case prosecutor at the Region 8 public prosecution office, who declined to be named, confirmed that his office had yet to decided if they would proceed with the case.

“I received the case at the beginning of this month [August]. I am now reviewing the case of Mr Thawee Thongcham, and others, for their alleged involved in the taxi mafia,” the prosecutor said late last month.

“With such a case, we need to review all the evidence provided by police before formally pressing charges against the suspects. We are still unsure if we will pursue this case or not.”

The prosecutor was not able to give a deadline for when he would be ready to make a decision on the case.

As of today, Mr Thawee remained in his position as the mayor of Karon.

“I have not heard anything further about the charges. For the moment, I am just doing the best I can as the mayor,” told the Gazette.